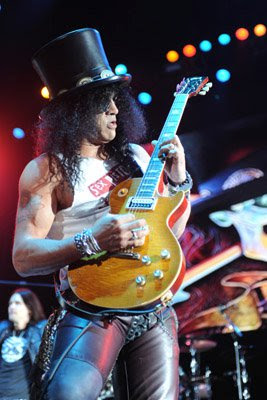 Appetite for Destruction came out in 1987 and sold 20 million copies worldwide. "Sweet Child O' Mine" became the band's first number hit, and two decades later, it's still a timeless classic together with many other materials from GN'R. Slash's riffs and solo in the track are hailed as indestructible-the kind of creation that guitarists can dream about for years on end and can never achieve.

"Obviously, [with] "Sweet Child O' Mine," I didn't it was a big deal at the time. I just thought it was an interesting riff. I had no idea it was gonna be as iconic as it became. So you just have these riffs, and you just think 'oh, that sounds cool'," said Slash.

In 1991, Use Your Illusion I and Use Your Illusion II came out, and GN'R was unstoppable. Even before the big time fame, GN'R was credited as "the Most Dangerous Band in the World," and the boys lived up to expectation to the fullest. Sex, drugs and rock n' roll, you name it.

The fans loved GN'R to be bad, and they couldn't have been happier to oblige.

It's a common knowledge that Slash consumed a half a gallon of vodka everyday for ten years. The lifestyle finally caught up with him, and now he's living with an internal defibrillator.

"I think it was alcohol poisoning. They told me I had eight days or weeks to live. So they put it in. But I miraculously reversed the condition, and they're gonna take it out."

"The Spaghetti Incident?", a cover album of '70s glam rock, came out in 1993. Things had always been rocky in GN'R camp despite their continuing popularity. Members came and went. Slash finally called it quite in 1996. Axl Rose still tours as Guns N' Roses with none of the original nor classic line up. There are still legal matters and public fueds to be settled until the present days. So when the million dollar question abound concerning the possible reunion, Slash was firm that there would be none of that.

"Do you feel like you're the only person in this whole room who's thinking about that question on this planet?" he said, not rudely. "No."

"It's been, what, 15, 16 years. No one in the original Guns N' Roses ever said 'let's try to put the band back together.' Also, it's all about Axl. The reason that everybody left was because in the back of his mind I think that's the way he wanted it. So the reason why there's no Guns N' Roses was because of him. I've got nothing to do with it. I quit for the same reason that everybody did. So it's really his problem," added Slash.

Leave Axl alone and stop having digs at him for gods sake.
Axl is only human and all you lot expect to much from him, give him a break.
Axl can only do his best and real fans will understand that.
If you cant accept Axl's best then your not real fans.
Go and pick on someone else for a change