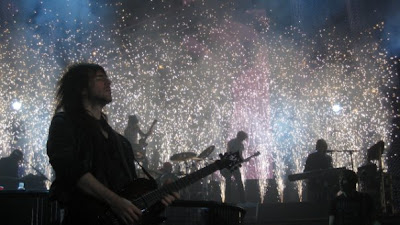 Bumblefoot gave an interview to a french metal webzine called MetalSickness after the Sturgis show (August 13).

MetalSickness: GN'R is an enormous engine. Was it easy to fit in ?

Bumblefoot: Sometimes I feel like I'm with my family and that we are an unstoppable engine and at times I think "I'm not in the right band. I shouldn't be here, this is not my spot."

I refuse to overthink it because it's easy to feel like you're in the wrong place. But when business problems break you, you become vulnerable. And it tarnishes the whole picture. I often end up feeling stronger emotions, more extreme emotions. After our last but one show, I thought it was the best show we had ever done, while during our last show (Sturgis) I had to leave the stage in the middle of the set because I couldn't handle my fucking rage and I had to calm down before it got the best of me.

MetalSickness: What did this experience change in the way you handle your job ?

Bumblefoot: I do not smile anymore.
posted 5:11 AM