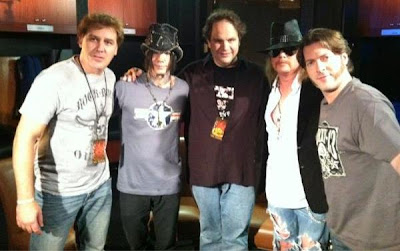 Axl Rose gave an hour-long interview to VH1 Classic's That Metal Show early Sunday morning, October 30 — a couple of hours after the band's headlining performance at the American Airlines Arena in Miami, Florida.

The last time Trunk interviewed Rose was in May 2006 when Axl dropped in on Eddie's Q-104.3 radio show and hung out on-air for two and a half hours. On that occasion, Rose came from a GN'R rehearsal to the Q-104 studio around 12:30 am to join Trunk, Scott Ian, WWE wrestler Chris Jericho and Sebastian Bach, who Trunk says "really made it happen."

Axl answered some questions from Trunk, saying the long-awaited Chinese Democracy CD would be out in the fall of 2006, and deflected others. He declined to identify the band's then-new lead guitarist (later revealed to be Ron "Bumblefoot" Thal) or explain why he aborted a 2002 tour beyond saying the tour wasn't his idea.

Trunk's connection to the GN'R camp goes back to 2003 when a version of a then-new GN'R song called "I.R.S." surfaced on a CD marked "New GNR" that was sent anonymously to then-New York Mets catcher Mike Piazza, who proceeded to play the track on Eddie's show, Friday Night Rocks. Shortly after the song was aired, GN'R management contacted the station and issued a verbal cease-and-desist order before arranging to meet with Trunk to retrieve the disc.

Rose gave a rare interview — his first in-person one with a print publication in 14 years — in December 2010 with the United Arab Emirates outlet Gulf News. Rose granted the interview prior to the band's gig in Abu Dhabi.

Aside from Billboard and Spinner interviews and answering a number of fan questions at a GN'R message board, Rose has done no promotion of any kind for Chinese Democracy.