Reckless Road to be Released in UK as a "Bookazine" 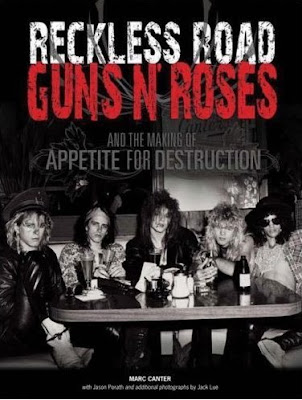 Marc Canter is an amateur photographer and the owner and general manager of the legendary rock 'n' roll hangout Canter's Deli in Los Angeles, California. He has been friends with Slash for over 34 years and, has had unlimited access to the formative years of one of the greatest rock bands of all time, Guns N' Roses. An avid collector, Canter is proud and excited to share his memories with the public for the first time.

When teenager and amateur photographer Marc Canter set out to document his best friend Saul Hudson's rise as a rock guitarist in 1982, he never imagined he was documenting the genesis of the next great rock 'n' roll band. His friend became the legendary guitarist Slash, and Canter found himself witnessing the creation of GN'R front and center. The candid shots contained in Reckless Road, taken as the band toured in 1985-1987 and made the legendary album Appetite For Destruction, capture their raw, blood-sweat-and-tears performances as well as their intimate moments. Containing original gig memorabilia including show flyers, ticket stubs, set lists, press clippings, and handwritten lyrics as well as in-depth interviews with band members and the people closest to them, Reckless Road offers an explicit, first-person perspective readers won't find anywhere else.

Discuss this story with other Guns N' Roses fans here.

Originally published in America in 2008, Reckless Road contains interviews with Slash, Duff McKagan and Steven Adler, as well as groupies, failed producers, and former managers and bandmates. Canter amassed a treasure trove of memorabilia, including:

* Lyrics to "My Michelle", written on the back of a water-stained flier
* A $37,500 advance check from Geffen that has Slash's name misspelled as "Stash"
* 1,000 never-before-seen photos
* Audio/video recordings for the bands first 50 shows