Inside Axl Rose's First TV Interview in Over a Decade 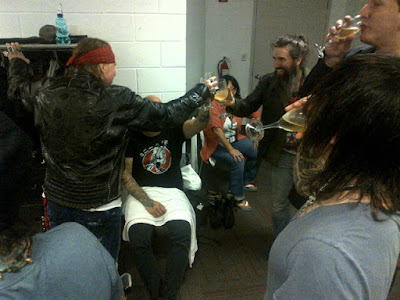 SPIN
For the first time in over a decade, reclusive Guns N' Roses frontman Axl Rose has sat down for a TV interview, chatting with Eddie Trunk, Jim Florentine, and Don Jamieson, the hosts of VH1's That Metal Show, backstage following a stop on GN'R's U.S. tour in Miami on October 29. The interview didn't start until 5:30 A.M. — and it went for close to two hours. There was a lot to catch up on. SPIN got the lowdown on what Axl discussed straight from Trunk. (The interview airs on the season premiere of That Metal Show on National Metal Day, November 11). "Love him or hate him, he's still Axl Rose," Trunk tells SPIN. "And he's masterfully found a way to always be interesting."

How'd this rare interview come together?
The only radio appearance Axl has done in the past few decades was on my radio show about five years ago. He walked into my radio studio in 2006 completely out of left field. Nobody saw it coming and he hung out with me for over three hours on the air. We had some connection, so I had a feeling that there was a chance this TV interview might happen. We have a level of trust. He's been at the top of our list for a long time. But it's always a gamble.

What did you think of the new lineup's performance?
I've seen various versions of GN'R since the original band broke up, some lineups better than others, but I was pleasantly surprised. Axl in particular sounded great. People always ask, "Was it as good as the original band?" No band is ever going to be as good as the original lineup. That shouldn't even a be part of the thought process. That said, they did great renditions of the old songs, they played the new material, and everyone had a solo, a chance to shine.

Why did the interview start so late?
I asked him about his perpetual history of late starts during the interview. He said it's all about when he feels that everything is right and he feels ready to go. He made a joke that being late has plagued him since his childhood. So, when the band went on at midnight I told my producer, "There's no way he's going to play for three hours, then get off stage and do an interview." Around 4 or 5 A.M. I was sure it wasn't going to happen. But sure enough, at 5:30 A.M., Axl walked into the locker room where we set up. He was as fresh as a daisy. He sat down and was in no hurry to leave. He wanted his guitarist DJ Ashba to be on the set with him, too. It was shocking. He's a nocturnal guy, but I expected him to walk off the stage and right out the door to South Beach. He said that in those couple of hours between the end of the show and the interview that he was cooling down. He takes a lot of precautions to preserve his voice. But it's all on Axl time, no question. If you're going to attempt to interview Axl, then you better get plenty sleep the night before, and not have anything to do early the next morning.

What was Axl's demeanor during the interview?
When he first came into the room he had his guard up. He knows me, but he did not know my co-hosts. But he looked great. About five minutes into the interview we had him chuckling. He loosened up and had some fun. We were not going to beat him up for coming in late.

Were there any topics you were told not to discuss?
The only thing he didn't want to discuss, understandably, was a reunion with the original lineup. He's all about this band, this lineup. Journalists constantly bring up the idea of a reunion. But there's nothing imminent about it. It defeats the purpose of what they're doing now. Axl feels like it's disrespectful to his new band. But we talked about past members of the band throughout the interview. Axl brought up some of the old guys before we even did.

So he's really excited about this new lineup?
Yeah. Axl emphasized that this current tour, which goes until the end of December in America, is extremely important to him and the new band. It's hugely important for fans to see him after all the BS and misconceptions. It's really important for fans to see him having fun and championing this band. Yes, this band is very important to him. He pointed out that every member of the band does a solo. He said, "If this was just the Axl Rose show, and I wasn't worried about promoting a band, then I wouldn't be giving these three different guitar players the spotlight." He said, "It's really important to me that people see this as a band."

Do you think this lineup will release new albums and tour more often?
I think so. Axl did say that he wants Guns to be more active. He feels good about the team around him. He has a new manager. Axl's bandmembers told us that he has a ton of songs that they've all heard. It's just a matter of honing in and getting into the studio to recorded and then release them.

Axl said that original GN'R bassist Duff McKagan's band Loaded will be opening select dates on this tour.
Yep. When I asked Axl about Duff playing with GN'R in England, he volunteered that information. However, I don't think there's any definite plan. Axl mentioned it in passing. But since then I've heard from a number of people doubting it, saying, "Well, that's a nice idea." To my knowledge there's nothing locked in yet.

Axl and his former manager, Irving Azoff, have been suing and counter-suing each other. Was that discussed?
We didn't get into the business and lawsuit stuff too much. But without citing specific names, Axl mentioned that various managers, agents, and promoters over the years have been far more responsible for what's gone down than he has. Axl is probably getting sued or countersued every day. It's almost hard to keep track.

Guns N' Roses are nominated for the Rock and Roll Hall of Fame. Did you ask about that? Who from the original lineup would attend the ceremony to accept the award?
Axl said that he doesn't really follow that stuff. He said it's an honor to be nominated, but he doesn't know how it's going to play out. Axl's a huge fan of Elton John and it was an honor for him to induct Elton a few years back. So it seems that Axl thinks that anything that's good by Elton is good by him. But it seemed too premature to discuss. First GN'R have to see if they get in. Then they'll see how it plays out. I've talked to Slash about it, too, actually. Slash and I are friends, and Slash basically feels that if they get into the Rock and Roll Hall of Fame, then they'll see who shows up and who doesn't. Whoever shows up will stand onstage. Slash remembered the legendary debacle with Van Halen. They had two guys who weren't even in Van Halen — Michael Anthony and Sammy Hagar — up onstage accepting the award! So I know Slash wants to avoid anything awkward like that.

Do you think the Slash Vs. Axl Rose beef is repairable?
I do. I saw Slash a couple days ago in Los Angeles, where I was giving an award for Ronnie James Dio's cancer foundation, and we talked a little bit. He knew that I'd just interviewed Axl, and he asked about Axl and how he was. I said that Axl mentioned him in the interview, and that it wasn't anything negative. Slash said, "Yeah, we've actually been pretty cool lately." Slash is a pretty easy-going guy, and he'll ride with the tide. But it's hard to get a read on it. But outside of Slash, Axl is cool with every other original member of Guns. Izzy [Stradlin] comes out and plays with Axl and the band every once in a while. Duff just played with him. There are no issues with either of the two drummers. If there's a rub with the Rock Hall induction, it would only be about Slash. In talking to both Slash and Axl, though, they're both very committed to their careers right now. Axl is amped about this new GNR lineup, and I just heard Slash's next record, which is coming out next year. It's amazing. The media dwells on their relationship more than the guys themselves do.