Slash Shares "Beggars & Hangers-On" from Made in Stoke DVD Set 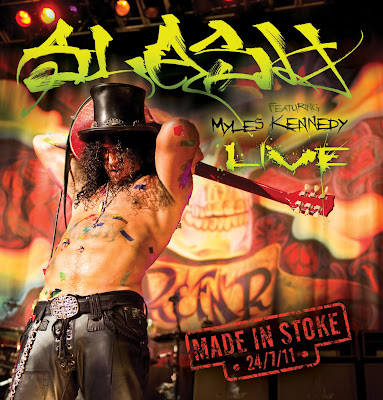 examiner.com
On March 31, 2010, the top hat-wearing hard rock guitarist Slash proved he could rock out without a ‘band’, as he released his eponymous premiere solo album. With the (permanent?) hiatus of Velvet Revolver, it was a long time since the public had heard the signature Slash sound, and boy, did he not disappoint. He brought in a laundry list of rockers to help him out, including Ozzy Osbourne, Lemmy, Dave Grohl, Duff McKagan, Flea, Izzy Stradlin, Alice Cooper, Kid Rock, M Shadows, Iggy Pop, Chris Cornell, and Andrew Stockdale.

While the album did fairly well with the critics, Slash’s fans were very excited to bang their heads to his killer guitar riffs and solos. On July 3, 2010, Slash released a live album called Live In Manchester (with Myles Kennedy as sole singer) featuring songs from every band of his career (Guns N Roses, Velvet Revolver, Slash’s Snakepit), his solo album, and even included a Led Zeppelin cover.

For awhile now, Slash has been teasing his fans via Facebook and Twitter by saying how well the production and recording are going for his newest solo album, which is set to be released in the spring of 2012 (this one will again have Kennedy as the sole singer). Recently, though, he announced that he will release Made in Stoke 24/7/11, another live album/DVD, on November 14. To give everyone a taste of what it will sound like, he has made one song available for our listening pleasure

Now, looking at the set list, it seems like Made in Stoke might sound very similar to Live in Manchester. However, the fans will still buy it, and everyone knows it is just marking time until the follow-up to Slash. Get ready to head-bang, fellow rock lovers! R&F’NR!
posted 12:54 AM