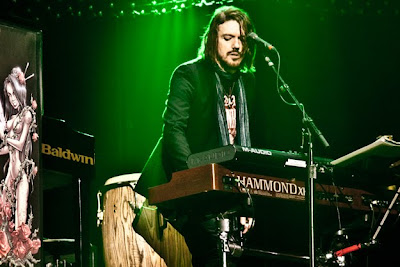 ultimateclassicrock
Guns N’ Roses keyboardist Dizzy Reed, who with over 20 years served is the second only to Axl Rose in terms of tenure, was recently kind enough to speak to us on the eve of the the band’s first North American tour (see dates below) in five years.

Reed discussed the criticism leveled at Guns N’ Roses for starting their concerts later than most bands, and for spending so much time creating new music. He also explained the common influences that brought him and Rose together, talked about his own upcoming solo album and when fans can expect new GN'R music:

So, you’re fresh off your South American tour, right? How did that all go?
Yeah, yeah! We got through it, we did all the shows, and it seemed great. It’s always great down there, the crowds are always really good in South America and Mexico, man. They like to rock out. It’s also nice to have a couple of days off, though!

Do you think too much attention is paid to when your shows start, or how long it takes you to release an album? Isn’t it a little silly to talk about stuff like that so much?
As a matter of fact, I never thought about it, but yeah, it is silly. It’s a rock and roll concert for Christ’s sake! I would think we get more than our share of that, certainly. But yeah, (music) is supposed to be inspired by creativity and good things in life, and having a good time.

Are you writing new material while you’re on tour?
I think, you know, all of us, as musicians and those of us that would consider ourselves composers, are always writing. I have a studio I take with me everywhere, and when I’m home that’s pretty much all I do. There’s so much material that’s been recorded in the past, that might put its head up sometime. We’re always writing.

So, we can maybe expect to hear some new GN'R music soon?
Hopefully, that’s the plan. But right now, we’re out there rocking Chinese Democracy and some of the older classic songs, maybe some new surprises, and that’s that. But I know, there’s always something brewing. There should be some new music coming out at some point for sure.

You played many Chinese Democracy songs live before the record came out, but are people reacting to them differently now that they’ve got the album?
Yeah, a lot of those songs, we’ve been playing some version of live for about, gosh … 10 years. You know, there used to be some head scratching in the crowd, but since the album’s come out you can see everyone’s getting into it. It’s very infectious, too.

You’ve been in Guns N’ Roses for over 20 years now, what were the common musical influences that drew you and Axl together?
I think we’re both children of the ’70s. We just grew up listening to a lot of the same stuff on the radio. Things aren’t like that now. Whatever city you were in had maybe two, maybe three rock stations and that’s what you listened to, that’s all you got. That being said, to me there was just a lot of great, great music that came out of that time. Anybody that sort of came up around the same time that we did had the same taste too. At least, people that I would choose to hang out and play music with! You just kind of gravitate together, move in the same direction.

Do you think music was better back then?
No, I just think there was less to choose from, and things weren’t as categorized. There wasn’t all these genres, everything wasn’t suddenly assigned something: “OK, this is punk, this is alternative,” you know. There was rock and roll, basically.

Would it be safe to assume given how you’re a keyboardist, that Elton John was a big shared influence between you and Axl?
(Jokingly) Who? Who’s Elton John? No, of course, Elton John. He’s one of the best ever, in my opinion. That’s probably why he invited him to play with us that one time, at the (1992) MTV VMAs. I forgot about that till just now, that was cool.

So, your covers band, Hookers N’ Blow is over, right? What else are you working on?
I recorded a record last year, called Rock and Roll Ain’t Easy, under my name, that should hopefully be coming out the first part of next year. When Guns N’ Roses aren’t touring I’ve been out supporting that already.

Are you singing? How would you describe the record?
I am singing, or, crooning as I like to say. It’s very rootsy, very groovy, very rocking, a lot of cool piano based songs, and about half of it is guitar-based songs.

Where can people learn more about that record — do you have your own website?
I gotta get on that. I have my Facebook page going, I just don’t really look at it that much. I’m still going through therapy from what MySpace did to my life (laughs), once I get past that I’m going to get back on the web!

Dizzy Reed: "A Lot of People are Waiting for My Record"
Dizzy Reed and Friends
posted 5:23 AM