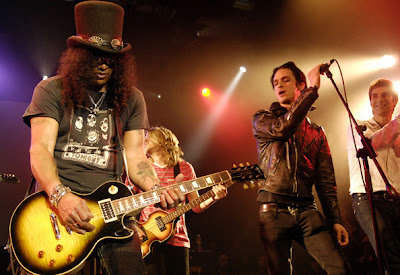 NME
Velvet Revolver will resume their search for a new lead singer later this year, guitarist Slash has revealed.

The band, who recently admitted that they had recorded an entire album's worth of material with Slipknot frontman Corey Taylor, but opted not to choose him as their new singer, have been without a frontman since Scott Weiland quit the band in 2008.

Both Slash and bassist Duff MacKagan had previously said that the band was on the back burner as they were both recording and touring as part of other projects, but the guitarist has now said that the band will begin auditioning new singers again in December.

In an interview with Billboard, the guitarist said that Velvet Revolver would be reuniting in December to "spend some time with a couple of singers", but stressed that this was all he could say on the matter.

Slash also spoke about Guns N' Roses nomination for the Rock N' Roll Hall Of Fame and said that he believed it was a "huge honour" to be nominated. He said: "It's become very prestigious over the years, and it's become a huge honor for anybody to be inducted into it, or even nominated, for that matter."

He added that he hadn't given much though to whether it would be possible for a reunion of the original line-up to be assembled for the induction. He said: "Of course, you have those thoughts of how it might work in case it does happen, but with Guns N Roses, there's really no guessing exactly how it will go. I suppose if it happens, everybody will get some sort of ducks in order."
posted 12:46 AM