Duff McKagan's Loaded Re-Loads for Another Round 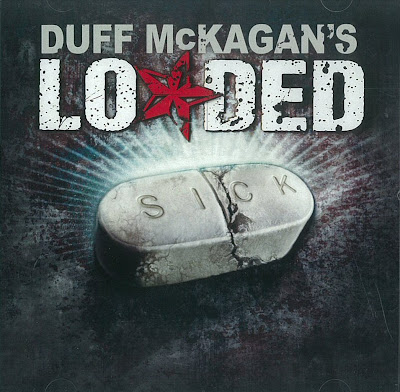 According to his twitter page, Duff "will be writing new LOADED songs tonite and tomorrow. Some great ideas and riffs have come on this latest tour. Excited for sure!"

This is bittersweet news for many of Duff's fans. In my opinion, it implies that Velvet Revolver is indeed staying parked on the back burner. 2010 will see Slash's solo album and I presume, an ensuing tour. Loaded, in turn, will likely cycle through another period of songwriting, recording, touring, etc. I imagine it will be a few years before VR convenes again, if ever.

"VR will continue our search for our singer. It WILL happen! When I speak of Loaded, I am certainly not speaking against VR!"

I've been listening to Loaded's latest Sick, and while I do enjoy it, it's a little to happy and upbeat for my tastes. I prefer their 2001 release, Dark Days.

There are some great songs on this record though. "Sick" has aggressive lyrics and a crazy guitar solo. "Forgive Me" is a perfect little alt-pop-rock song that crystallizes Loaded's sound quite well. Duff's vocals sound great on that track. "Wasted Heart" wouldn't sound out of place on the Stones' Beggars Banquet LP. "No More" is probably the catchiest tune on the disc.

In an interview with Guitar World Magazine, Duff explained that the band decided to write a new album when, at a Christmas benefit gig, they realized how many good unrecorded songs they had.

Although Duff wrote most of the songs on Dark Days, much of Sick was composed by the band or with other writers. One track, the somber “Mothers Day,” took shape from McKagan and Rouse jamming together on bass guitars. It was called “Two Basses” until McKagan wrote lyrics about friends he’s lost to drugs.

Surprisingly, although doing time in GN’R and Velvet Revolver cemented his association with Slash, McKagan credits former Gunner Izzy Stradlin as the guitarist that most influenced his own rhythm playing. “I think from Izzy I learned where a rhythm guitar player should be, within the band,” McKagan says. “As a result, I don’t overthink it.”

thanks for the link in the previous article's comments section ;)