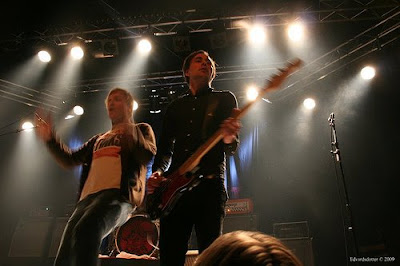 The group which went by the name "Slash & Friends" arrived on the scene Tuesday evening at Quart. Slash shared the stage with Ron Wood, Ozzy Osbourne, Jason Bonham and Fergie. How well this worked, opinions varied during and after the concert. One of those who wasn't satisfied was guitarist and vocalist Terje Winterstø Røthing. He played with Skambankt earlier in the evening.

"This is the great rock 'n roll swindle. And you can quote me on that."

"Can you elaborate a little?"

"What can you really say beyond that? The biggest karaoke show ever."

Reviews after the concert were varied. Torgrim Øyre of Dagbladet described it this way: "Slash & Friends - one of the most unlikely gigs in Norwegian festival history." He gave it four stars, and described the group as a "high-profile cover-band." Harald Fossberg of the BBC was "not impressed," and called the scheme "Slash Karaoke." He gave it three stars, as did VG. 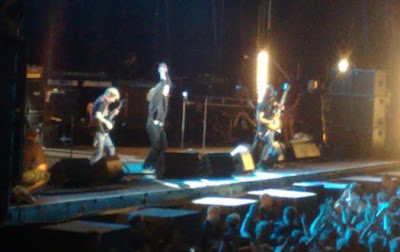 Audiences we spoke with after the concert were divided in their opinions. Arne Grimerud walked out before Ozzy went on stage.

"It was just sad. To see my old heroes up there doing karaoke wasn't anything special. It was a fun experiment, but nothing more," he said on his way out of Bendik Bay.

Sonia Nes had traveled from Denmark to get to the concert. "Fantastic! We'll never see this again. People from Guns N' Roses, The Rolling Stones, and Black Sabbath together on the same stage. It was great," she said.

Vidar A. Hansen who came with a large group of friends spoke with us immediately after the show.

"Slash is a genius, but Fergie on vocals for "Sweet Child O'Mine" was not so great. Ozzy, however - well, he is Ozzy, 'The Prince of Fucking Darkness!' It's amazing that he's able to sing at all, and he actually did quite well. This was the best show - it worked surprisingly well," he said.

What do you think after seeing the videos? It's not like they are going to write original material.

patrick - I'm a Slash fanboy. The gig looks like it was alot of fun.