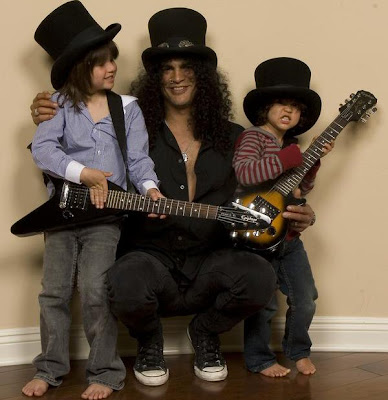 Slash was born Saul Hudson on this date in 1965, in Berkshire, England.

Slash is a living legend, and the most distinctive guitar player of his generation.

His guitar playing on Appetite for Destruction is the ultimate fusion of Sleazy Blues and Punk Rock, and has never been replicated since, even by Slash himself.

It's been a strange year for Slash.

Besides working on his solo album, Slash rocked Norway's Quart Fest with an all-star group of musicians and vocalists.

On June 5, Slash's mother Ola Hudson passed away. She was only 62. Her death was sudden and unexpected.

In May Slash was a mentor on American Idol's Rock Week. He played with Tommy Clufetos (drums), Chris Chaney (bass) and Kerri Kelli (guitar).

Slash's solo disc is expected out in early 2010. His band, Velvet Revolver is currently on hiatus.

If you're in Vegas tonight, the Mirage hotel and casino is throwing a birthday party for Slash at the Jet nightclub.