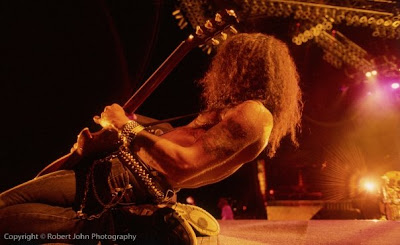 Classic Rock
Slash was unhappy throughout his entire career in Velvet Revolver – and working on his forthcoming solo album has given him a new creative lease of life. The former GN’R/VR guitarist has been talking to Classic Rock about the dissolution of VR and how the band’s split with Scott Weiland pushed him work by himself on a solo album.

“Now at this point I can talk about it,” says Slash. “I always support whatever group I’m playing with – I’ll never say anything bad about them while I’m in it. But fuckin Velvet Revolver – that was the toughest five years, dealing with that band, just because of the obvious [Weiland] and really, really bad management. Joke management for the entire time.

“For some reason in that entire five years I could never be happy. I could never get comfortable and happy with it because it was such a fucking mess. That last tour in the UK was the first time I ever had any fun in that band – because I knew that Scott was leaving and it was a huge relief.

“But, all things considered, Scott to me is now like George Bush – y’know, I like him now that he’s not here. I have nothing bad to say about Scott, but he doesn’t work well with others in a group situation. So towards the end I had written a bunch of music and there were a lot of restrictions because of him writing in Velvet and a lot of stuff that I wanted to do was just sort of squelched. Y’know Slither happened and Fall To Pieces and a couple of other songs I wrote, but it didn’t have the direction that the group – especially before Scott came into it – really set off in. Especially on that last record – which I still think is a good record, but was a lot mellower than [I would have liked].

“Anyway, so I was writing a lot of material and on that last UK tour I started taping a lot of stuff and when I got home I was like, ‘I need to get away from this group situation – I just need to be in control of something and do things my own way’. So it was a relief. And we’ll see – it’s not really about trying to make the biggest record in the world, but I will support it. I’ll go out there and do what I have to do to make sure that people go out there and listen to it cos I think it’s a cool record.”

How will that affect Velvet Revolver?

“Well Duff’s on tour, I’m doing my record, so it’s sort of at a standstill. I haven’t heard any amazing submissions from singers as of late, so I might… Y’know, Velvet when it finds the right guy will be amazing, but I’m in no rush. I’m not freaking out – because that’s how we got Scott in the first place. He was the first decent guy that came up.”

After the Norway gig everyone is going to think Franky Perez is the guy.

“I thought about that. Yeah, Franky’s fucking bad ass. You know, he did some time with Velvet but I think because I was so preoccupied with my record nothing really came of it. Anyway, we’ll see what happens. When my record comes out there’s going to be a lot of different things that I can do so what happens as far as Velvet is concerned – we’re going to be on a hiatus until we lock together and say, ‘Hey, these are our options, let’s see what we’re going to do’. I don’t know if Franky is going to be the guy or what – he’s just a really, really good singer. Even Ozzy came up and said, ‘Who the fuck is that guy? He’s fucking great!’ He actually said: ‘What the fuck am I doing up here? He’s the one that should be singing…’”

In Norway, Franky Perez confirmed that he had worked with VR in the last six months: “I’ve probably known Slash a little under a year. We have this mutual friend and we’ve run into each other a few times but we met – actually met, met – about six months ago. And then I was working with Velvet Revolver for a little bit and then Slash started doing his solo record…”

So you worked with VR after Weiland left?

“Yes. So I got to hang out with all the guys and started working with them and then about the same time Slash had to work on his solo project and Duff was doing Loaded so that dissipated, but the great thing is that I got to have a great relationship with Slash.”

Did he realise that the internet was going to be filled with ‘Franky-is-the-new-Velvet-Revolver-frontman’ stories?

The singer just smiles and shrugs: “Well, you know, if the opportunity comes around, I’m ready.”

Slash: "Scott is a cancer"

so there you have it...scott was once cancer and now he's kinda ok if he's not there. And in slash's book he describes VR experience as feeling part of a band again, glorifying the prospect of being in a "real band". One year or so later, he was miserable all the time...

And who's turning it's own direction for control issues?
Guess what, it's not only the "red haired tyrant".

Chances are his solo album will be another edition of "libertad". Velvet Revolver equals 1 great song: Slither. And that's it.

I wish Slash all the best, since he's a beyond words guitarrist, but his sheer inability to write lyrics will end up in several albums, one after another, very similar to each other. I heard the "libertad" album three times, the last one clearly out of respect for Slash and Duff. It's just not a good album.

yo ho ho and all that jazz