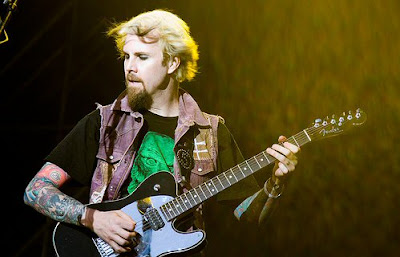 via Blabbermouth
Ozzy Osbourne has revealed to Classic Rock magazine that he is currently searching for a new guitarist for his solo band.

Classic Rock caught up with Osbourne last week at the Slash & Friends gig in Norway, where the whispers backstage had guitarist John 5 lined up as a possible replacement for Zakk Wylde.

"Well, I'm getting a new guitar player as we speak," Ozzy told Classic Rock, "and everyone has been saying to me for a long time, 'Get Johnny 5!' And I tried him at one time and I didn't really give him a chance. We'll see, I don't know. I haven't fallen out with Zakk, but Zakk's got his own band, and I felt like my stuff was beginning to sound like Black Label Society. I just felt like I wanted a change, y'know?

I've got a guy from Greece coming in — not the musical, the country of Greece — but I'm not going to say too much about it, 'cos I don't know myself at this point. I've got a new album, I'm working on it as we speak. I've got a studio at my house and I've got a guy called Kevin Churko, the guy that did the last album — he's great to work with.

And it's great to have your own studio. On one hand it's great and on the other it's not, 'cos when you're at the studio you can go, 'Sorry darling, I can't get home for dinner, I'm stuck at the studio' But she can fucking come down stairs now! But I'm just enjoying my life now"

Classic Rock: So you're taking it easy recording this album?

Ozzy: "Oh yeah. Zakk came down and did a bunch of stuff and I don't know if I want to use it but I've got it there if I do. And this Kevin Churko is a bit of an all-rounder so I'm getting back to basics in some respects. One thing about a guy who can't do all the finger-tapping stuff is that he plays better on the riffs 'cos it's not all [hums riff for 'Iron Man' followed by over-the-top widdling]."

Classic Rock: Does Heaven & Hell having a new album out make you more competitive?

Ozzy: "No. Not in the slightest. I really wish them well. I mean I've been out of that band three times longer than I was ever in them. But people say, 'What do you think about Dio?' He's great singer. I've grown up since the days when I used to get pissed and slag him off. For whatever it's worth, good luck to them. I don't want to make enemies — I made enough when I was drinking, I try to make friends with people these days!" 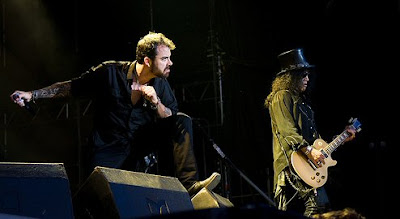 You can read the full interview here. Thanks to IngridMJ for the photos.
posted 8:16 AM