"Coke was dripping out of Izzy's nose, but he didn't realize it because his face was numb" 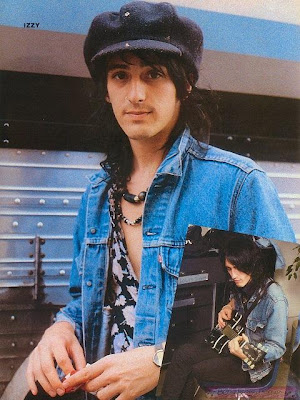 I Want My MTV: The Uncensored Story of the Music Video Revolution - a new book by Craig Marks and Rob Tannenbaum, collects interviews with over 400 key people from MTV's Golden Age. In one interview, (MTV's) Peter Baron, (director) Nigel Dick, (manager) Alan Niven and (drummer) Steven Adler reminisce about the shoot for GN'R's "Patience" video.

Said MTV exec Peter Baron, "The first Guns N' Roses video I commissioned was 'Patience.' Alan Niven sort of co-directed those early videos with Nigel Dick. We shot the conceptual part at the Ambassador Hotel, and the performance in Hollywood. Of course Axl showed up about seven hours late. And Izzy was screwed up. Coke was dripping out of his nose, but he didn't realize it because his whole face was numb."

"Izzy," said Alan Niven, "was in the depths of a cocaine habit that was destroying him, sat in a dark corner while we were filming. When we looked at the footage, Nigel and I agreed to minimize Izzy in the video, because he looked wretched. He got sober not long thereafter, but that video represents the nadir of Izzy's cocaine habit. There were other moments when Slash was in dire condition, and moments when Steven was in dire condition. Those were the three that had the biggest problems with excess."

"I was sitting there rolling joints," says Steven Adler. "That was my whole gig in that video: light incense and roll joints. As for Izzy, if you look at the cover of Rolling Stone when we were on it in 1988, he's sitting on the ground, and if you look at his wrists, you can see the track marks. He was doing drugs longer than any­body, but he ended up getting it together better than anybody, and then he left the band because he got clean and couldn't be around us."

Director Nigel Dick adds "Mostly what I remember about that video is a shitload of chicks and coke."

"It was like Spinal Tap with money"
posted 7:55 AM