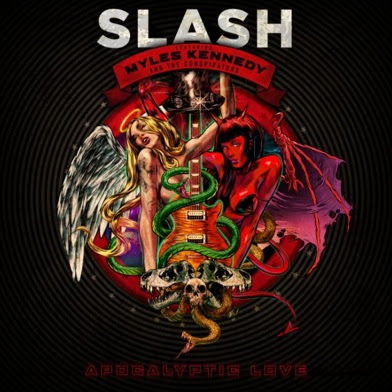 It's a great time to be a Slash fan.

The iconic guitarist has been working non-stop ever since he re-emerged as a solo artist, and there's more music coming this Spring.

Two years ago, he released his first solo record - SLASH - featuring an all-star roster of guest vocalists; He embarked on a mammoth world tour with a great band featuring frontman and SLASH contributor Myles Kennedy; Last year's Made in Stoke 24/7/11 live album and DVD, captured the show that got rave reviews from fans on every corner of the globe.

Now the band - "Slash featuring Myles Kennedy and the Conspirators" - are ready to release their first studio album together - APOCALYPTIC LOVE.

This is reason to celebrate. Fans know what to expect from a Slash album -- a bunch of great new rock songs full of killer riffs and classic solos.

And once again, Classic Rock is offering an exclusive fan pack edition of Slash's new album that includes the CD + bonus tracks and a collectible magazine.

To celebrate this landmark release, GunsNFNRoses.com is giving away three copies of Classic Rock's Slash Fan Pack. To enter, simply leave a comment here telling us why you're looking forward to Slash's new album. You can enter a second time by following us on Twitter and then tweeting a similar message. Let us know by including both "@gunsnfnroses" AND "#fanpack" in your tweet. We’ll give you a third chance to grab one of the packs by "liking" us and leaving a message on our Facebook wall. Be creative. Once the contest entry period closes we’ll tally all the entries from our forum, Facebook and Twitter and pick three winners at random.

To enter the contest, leave a comment here telling us why you're excited for Slash's new album.
You can enter a second time by "liking" us and leaving a similar comment on the wall of the Gunsnfnroses Facebook Page
You can enter a third time by following @gunsnfnroses and then tweeting a similar message to us, including both “@gunsnfnroses” AND “#fanpack″ in your tweet
Your comment(s) must be left by 11:59 PM Eastern Time on May 20
Anybody entering more than once a piece on Facebook, Twitter and here will be disqualified, drawn and quartered
Three winners will be selected at random from all entries
GunsNFNRoses staff members are not eligible to win
posted 2:23 PM