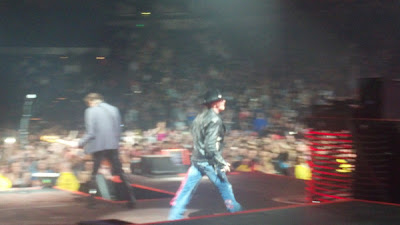 Last night, at the Bridgestone arena in Nashville, TN, Axl Rose sang "Civil War" for the first time in nearly 19 years! The last time he sang it was on February 6, 1993 in Auckland, New Zealand as part of the original band's Use Your Illusion tour.

Earlier this year, Axl also dusted off "Estranged" after an absence of 18+ years.

Guns N' Roses have been nominated for the Rock N' Roll Hall of Fame. Many people expect a reunion of the original band, should they be inducted in April 2012.