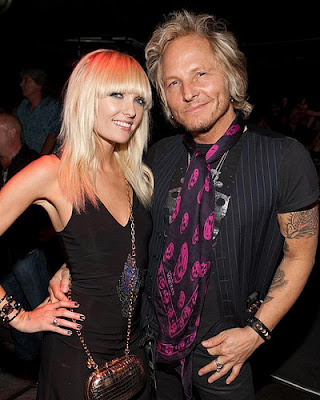 via Blabbermouth
Matt Sorum predicts that the band's upcoming induction into the Rock And Roll Hall Of Fame will be a "train wreck" because of ongoing tensions between the group's lead singer, Axl Rose, and former guitarist Slash.

The sole remaining original member of Guns N' Roses, Rose seemed to rule out any possibility of working with Slash again in a 2009 interview with Billboard. "What's clear is that one of the two of us will die before a reunion and however sad, ugly or unfortunate anyone views it, it is how it is," he said.

When asked by Australia's TheVine earlier this week about the possibility of a reunion of Guns N' Roses' classic lineup at the upcoming induction ceremony, Sorum said, "It's going to be as big of a train wreck as the Sex Pistols, Blondie, or any of those other bands. That's my prediction. Or Van Halen, which I don't know if you saw, but we [Velvet Revolver] were involved in that. Train wreck; it was a complete train wreck. But maybe it won't; maybe it will be a miracle; I hope for that and put out the positive vibrations. But it's coming up pretty quickly. That's in March, so we'll see."

Sorum also commented on Rose's recent interview with VH1 Classic's "That Metal Show" in which Axl gave off the impression that the tension between the singer and some of his former bandmates had dissipated quite a bit. "I don't know, man," Sorum said. "You know, I don't want to say, because then this will be all over the Internet and I'll just get a bunch of shit for it. The problem is that a lot of the fans don't even take what I have to say with a grain of salt. I'd rather if Slash had that conversation. And Slash is the quiet one; that's the problem. He's not like me. I'm just like a guy who's a little bit more off the cuff — I kinda say what I'm feeling. Slash will just not say anything and that's the way he likes it. And then I'll open my big ol' mouth and the next thing you know I'm getting slapped around the Internet by all the jackasses on their blog sites — you know what I mean? So it's better if I just go, 'I don't know shit.' Which is the absolute truth [laughs]. They could be in a room right now having a coup around a bonfire, eating samoras, and talking about the resurrection of the Holy Grail. Seriously, like the Illuminati or some shit [laughs], and I wouldn't be invited, you know what I'm saying?"

As previously reported, Adler told Rolling Stone that he thinks Sorum should be inducted into the Rock And Roll Hall Of Fame along with keyboardist Dizzy Reed, who joined the touring lineup around the time Adler exited. The drummer explained, "I do believe that Matt Sorum and Dizzy Reed both have every right to be inducted too. Dizzy did play on 'Use Your Illusion', and he's been with Axl longer than anybody. He deserves it. Matt Sorum also played on 'Use Your Illusion'. I think that the seven of us deserve it."

Reed is still a member of GUNS N' ROSES today, having the longest tenure aside from Axl Rose.

Sorum left sometime in the mid-'90s as the rest of the classic version of the group fell apart.

It was announced on Wednesday (December 7) that Guns N' Roses will be inducted into the Hall on April 14 in Cleveland, along with the Red Hot Chili Peppers, The Beastie Boys, Laura Nyro, Donovan and others.

When asked if he thinks the entire original Guns lineup will show up at the induction ceremony, Adler said, "Absolutely not," adding that the bad blood between Rose and Slash is the sole factor holding up a full GUNS reunion: "For twenty years, because of some stupid grudge, which I guarantee you that neither of them could even tell you what it was. They don't even know! . . . twenty years of great music wasn't created because of some stupid grudge."
posted 7:01 AM