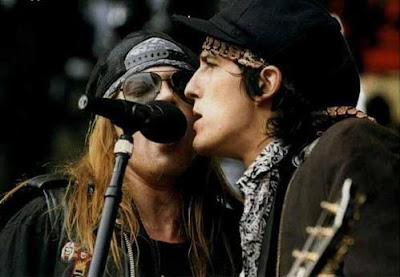 Specifically, for a nod from the Rock and Roll Hall of Fame and Museum in Cleveland, where the stars who once filled our ears get another shot at immortality, or at least some big money.

With the recording industry under financial attack from many sides, one of the few ways for old acts to pique new interest is to be inducted into the hall of fame. So, each fall, managers and record labels dive into a mosh pit of monster egos, clashing tastes and rival interests in the industry, all in the hope of placing their artists among the royalty of rock. The 15 nominees for 2012 include The Cure, Donna Summer, Joan Jett and the Blackhearts and Guns N’ Roses. Ballots are due on Sunday, and winners will be announced on Wednesday.

For the inductees, the reward can be enormous. Weekly record sales for a performer or band leap 40 to 60 percent, on average, in the weeks after selection, says David Bakula, a senior vice president at Nielsen SoundScan. While winning a Grammy often helps one album, a nod from Cleveland can lift an entire back catalog.

These days, labels and artists need all the help they can get. The music business is worth half of what it was 10 years ago, and the decline doesn’t look as if it will slow anytime soon. Total revenue from shipments of CDs, DVDs and other music products in the United States was $6.85 billion in 2010, according to the Recording Industry Association of America; in 2000, that figure topped $14 billion.

But the path to the hall of fame can be long and difficult. Controversy surrounds the selection process, which is shrouded in secrecy.

What is known is that a nominating committee of about 30 music critics, entertainment lawyers and recording executives winnows the field each year to 15 artists. Then another committee, this one of about 500 people, including past winners, selects five inductees. Artists can qualify for a spot 25 years after their first recording, which means that performers from the 1980s now have a chance to rank up there with Elvis. (The winners to be announced this week will be inducted at a ceremony next April.)

With fame and money at stake, it’s no surprise that a lot of backstage lobbying goes on. Why any particular act is chosen in any particular year is a mystery to performers as well as outsiders — and committee members say they want to keep it that way. The Bee Gees were passed over 11 times before being inducted in 1997; some fans and managers say the long wait reflected an anti-disco bias within the selection committees. And despite 27 studio albums and 45 years of touring, as well as a style that would influence many other artists, Alice Cooper was passed over 16 times before finally being inducted this year.

“When I wasn’t being nominated, I played it down all the time,” Mr. Cooper says. “But it really does make a big difference.”

He continues: “I used to think that when you got in, you’d understand how it worked, and how you get nominated — there would be a secret handshake, and there’d be a dossier about Area 51 and the president’s assassination.”

Rhino Records, which handles his back catalog, took advantage of his induction, however. It ran 30-second spots during the televised induction ceremony and made sure that Alice Cooper compilations, boxed sets and deluxe editions were available at Web sites and brick-and-mortar retailers. Mr. Cooper says the number of young people attending his concerts has jumped. So far this year, sales of his CDs, digital albums and other compilations are up significantly in the United States, to about 115,000 from 75,000 in all of 2010, according to Nielsen SoundScan.

In 2009, good news from Cleveland bolstered the career of Wanda Jackson, “the queen of rockabilly,” who gained fame in the mid-1950s and 60s. After Ms. Jackson was inducted, she collaborated on an album with Jack White of the White Stripes. Suddenly Ms. Jackson, who is now 74, was everywhere, opening for Adele’s 2011 tour and even rocking out, alongside Mr. White, on the “Late Show With David Letterman.”

“She had a phenomenal and, frankly, deserved refocus on her life and career,” says Joel Peresman, the president and chief executive of the Rock and Roll Hall of Fame Foundation. “I think we give some really deserved artists another chance at the spotlight.”

Their labels get another chance, too. The biggest gains come for artists who, along with managers and record labels, aggressively promote their hall-of-fame status in music magazines and online. Many also rush out or reissue boxed sets, greatest-hits albums and commemorative CD-DVD collections.

“Because of the increased awareness, there’s definitely an increase in sales across their catalogs,” says Jane Ventom, senior vice president for catalog marketing at EMI Music North America.

Bands that split up near the peak of their popularity and then get back together for the induction ceremonies can reap the biggest rewards, because fans often dream of a big reunion tour, à la the Eagles.

“With certain artists, it really gives them another bite at the apple,” Mr. Peresman says.

But this being rock ’n’ roll, things don’t always go smoothly. The Sex Pistols were no-shows at their induction in 2006. When Van Halen was inducted in 2007, fans buzzed that David Lee Roth would get back together with his old band mates and, possibly, agree to a reunion tour. But old squabbles resurfaced, several Van Halen members didn’t show, and Velvet Revolver was brought in to play some Van Halen hits as a tribute.

This year, many in the industry are watching Guns N’ Roses. The front man Axl Rose and the guitarist Saul Hudson, known as Slash, had a fallout during the early 1990s, when the band was at its peak. Speculation is rife that Mr. Rose and Slash might reunite for the ceremony if the band is inducted. Mr. Rose has been playing with a rotating roster of musicians under the Guns N’ Roses name, a move that has sharply divided fans. Big-name managers like Irving Azoff, who successfully reunited the Eagles, have tried and failed to get the original band together.

Mr. Cooper, who is a friend of both Mr. Rose and Slash, says a reunion tour would be a huge hit. The payoff could be tens of millions of dollars, if not hundreds of millions.

“If they got together, they would be selling out football stadiums,” Mr. Cooper says.

Cliff Burnstein, co-founder of Q Prime Management, which represents Metallica and other bands, agrees. “If they announced a tour off of that, it would kill — totally kill,” he says.

Mr. Burnstein has been lobbying this year on behalf of the Red Hot Chili Peppers, who are among the nominees.

Another 2012 nominee, War, is in a similar situation, although on a smaller scale than Guns N’ Roses. War split up in 1986, and several founding members formed the Lowrider Band. War’s lead singer, Lonnie Jordan, who carried on under the original name, hasn’t spoken to his former band mates for years, except in court, but he says that he hopes all of them will show up if War is inducted into the hall.

“We had a great marriage at one time and we made beautiful kids, which is the music,” Mr. Jordan says. “I hold no grudges against anyone.”

Jann Wenner, publisher and co-founder of Rolling Stone magazine and co-founder of the hall of fame, says that most artists put aside their differences when inducted, even if it’s just for a night. The Van Halen fiasco was an anomaly, he says.

Such dramas aside, the big issue for many industry insiders is the selection process itself. Doc McGhee, who manages Kiss, has been particularly critical. He says the hall of fame has had a bias against certain hard-rock bands like Kiss, Bon Jovi and Def Leppard. (Kiss fans have gone so far as to stage rallies outside the hall of fame.)

Allen Kovac, the president of Tenth Street Entertainment, says he had to intervene on behalf of the Bee Gees, who were a client. He called two committee members at the time — Ahmet Ertegun, founder of Atlantic Records, and Seymour Stein of Sire Records — to make a case for the band, a chart-topper in the 1970s.

“There was a great prejudice against one of the best groups of all time,” Mr. Kovac says. “They were being held out of the hall of fame because some guys didn’t like ‘You Should Be Dancing.’ ”

Most bands and managers don’t have that kind of access, and Mr. Kovac says he would like to see the nominating committee overhauled to include representatives from new forces within the industry, like iTunes, Yahoo and Pandora.

Mr. Peresman of the hall of fame says plans are in the works to get the public more involved. The hall recently introduced a feature on its Web site that lets fans vote for nominees. The poll, however, will have no impact on the committee’s decisions.

Jon Landau, who manages Bruce Springsteen and is chairman of the nominating committee, concedes that the choices are subjective. But he defends the status quo. The hall of fame, he says, recognizes quality and influence, not record sales or flavor-of-the-month popularity.

“I, like everybody else in the room, have favorites,” Mr. Landau says. Committee members, like old band mates, often bicker among themselves. But don’t expect to hear the details.

“We’ve done a good job of keeping the proceedings nontransparent,” he says. “It all dies in the room.”
posted 6:56 AM