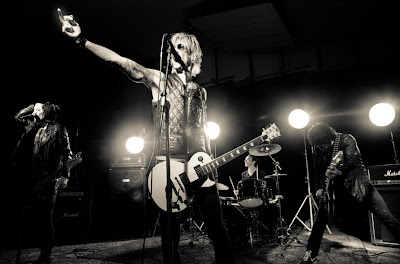 REVERB
After weeks of speculation, it was confirmed a few days ago that former Guns N' Roses bassist Duff McKagan's band Loaded will open two shows for the latest version of GN'R on that band's current North American tour. Loaded will warm up for GN'R on December 16 at the Key Arena in Seattle and December 17 at Pacific Coliseum in Vancouver, British Columbia, Canada.

In the latest installment of his column, McKagan stated about the prospect of opening for his old band, "I was somehow reluctant at first to do this. I love that dude (Axl) but wanted to sort of stay out of the fray, especially after that whirlwind tour of the world we had just done. AND that damn book tour.

But this fray is only a fray if I let it be. And now I am actually pretty excited to see my old pal. His band is the nicest bunch of fellas, and I will be home after all. The KeyArena will be rocking tomorrow night . . . and I hope you all show up.

After all, it is just some dudes doing what they know how to do best: connect with the audience, that fan-ship that has honored us with their presence for so damn long. And THAT, my friends . . . is overwhelming."

McKagan made worldwide headlines in October 2010 when he joined GN'R onstage for four songs at a concert in London, England, marking the first time he had set foot on a stage with Axl Rose in 17 years.

Guns N' Roses will be inducted into the Rock And Roll Hall Of Fame next April in Cleveland, prompting speculation about whether the event could lead to a reunion of the band's original lineup.

McKagan admitted last month in an interview that he had a hard time imaging such a possibility, saying, "I can't. I can't picture it. Your guess is as good as mine. There is no picture."

In his latest SeattleWeekly.com column, McKagan addressed the upcoming induction, writing, "Music to me has never been a competitive sport. We do what we do, and if you connect with an audience and write the songs that feel good to you in the process, that is reward enough. Getting a Grammy or an American Music Award seems a little bit weird in this whole context. I mean, are you BETTER than all those other bands? No. You are just doing YOUR thing, and they theirs. It's not a competition.

But it became very apparent to me that fans of GN'R felt very motivated for our band to 'get into the Hall.' All of those fans ARE very important to me, and thus getting this Rock And Roll Hall Of Fame nod was a victory for them. And so I am deeply honored and feel very good about this whole deal. Thank you all.

I spent a lot of time revisiting my past in the book I just wrote. Living in the past, or just revisiting it, is something I hadn't done until I was in the process of writing that book. The process became personally poignant in how much I appreciated and loved most of the characters in my past, especially the guys in that little band from Hollywood that we formed just after I moved there in 1984.

I've done my best to avoid doing any interviews that pertain to our induction, and maybe this column will serve as all I really need to say for now. I am a grown-up now, and hope that we can achieve some grace and class when that ceremony comes. But in the end, I am only responsible for myself."

Rose was ambivalent in a recent interview about the Hall Of Fame, and told Billboard.com in 2009 that he could never see himself playing with original Guns N' Roses guitarist Slash again, saying, "One of the two of us will die before a reunion. However sad, ugly or unfortunate anyone views it, it is how it is."