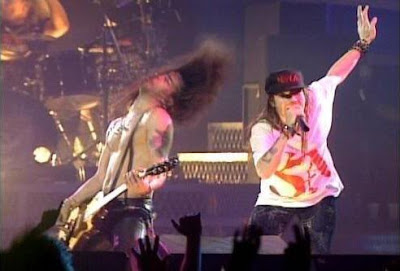 WENN
A group of Italian Guns N' Roses fans have launched an online campaign in a bid to urge the original members of the band to reunite for next year's Rock N' Roll Hall of Fame induction ceremony.

The group are favourites to be added to the Cleveland, Ohio museum on April 14, 2012 and devotees hope the big occasion will bring Axl Rose, Slash, Duff McKagan and Izzy Stradlin back together.

Fans are being asked to sign a petition on GNRonline.it - the biggest online Italian community dedicated to Guns N' Roses.

The official statement reads, "25 years ago a band would come and save Rock N' Roll. 25 years later they are taking their place in history - this might be your only chance to see Axl, Izzy, Slash, Duff and Steven play together one last time - you know it's hard, but together we will make it - join our call and PLEAD FOR a Guns N'Roses reunion at the Rock N' Roll Hall of Fame on April 14, 2012. We see in the plausible Rock N' Roll Hall of Fame induction ceremony, which will take place on April 14, 2012, a unique possibiliy to make this happen. Perhaps the only one. Our decision goes beyond any other projects Slash, Izzy, Steven or Duff might be working on. It goes beyond the "New" Guns N' Roses, whose Chinese Democracy and tour we always supported and will continue to do so as GN'R tours the Americas in 2011.

You can view the petition here.