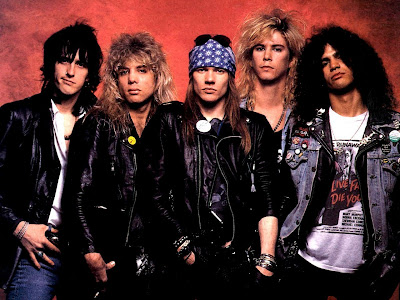 Tomorrow - Dec 7, 2011 - the Rock and Roll Hall of Fame in Cleveland, Ohio will officially announce that Guns N' Roses have been voted in.

The ceremony will take place on April 14, 2012 in Cleveland. Many fans hope that this occasion will entice the Classic Lineup to appear together on the same stage for the first time since 1993.

Slash and Steven Adler have both said they will attend the ceremony, and in his interview with Eddie Trunk this past October, Axl Rose seems to have softened his stance against appearing there.

Axl Rose recently revived "Estranged" and "Civil War," 2 songs he wrote with Slash and has not performed since 1993.

Congratulations guys! You deserve it!!