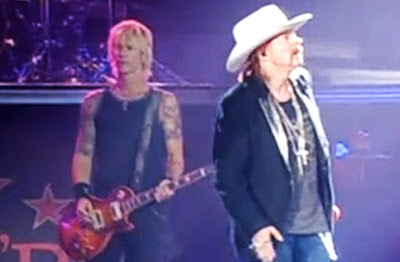 It's been rumored for some time, but I just got the word from our friend Duff McKagan -- his Seattle band, Loaded, will indeed be opening for Guns N' Roses at KeyArena on Friday and at Vancouver's Pacific Coliseum on Saturday.

This will be the first time that McKagan -- the founding bassist of Guns N' Roses -- has opened for the current incarnation of GN'R, which is fronted by Axl Rose, the sole remaining member of the band's classic lineup. Last week, Guns N' Roses got the word that they'd be inaugurated into the Rock N' Roll Hall of Fame next year.

McKagan, who recently published his first memoir, It's So Easy, about his life inside and out of music and GN'R, writes a weekly column that runs every Thursday on Reverb. He'll address this news then.

One thing's for sure, Friday's show -- that was featured on Groupon last week -- just got a whole hell of a lot more interesting. Tickets are available for $26.50 to $72 via Ticketmaster.