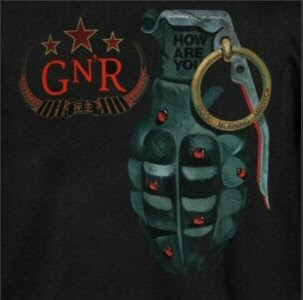 The following is an excerpt from a Japanese Interview with Chris "Mother Goose" Pitman, keyboard player for Guns N' Roses, SexTapes, Lusk and more. A big thanks goes out to MYGNR and Ayako for posting it first!

How come some people call you "Mother Goose?"

Chris: That was a nickname I acquired sometime when Buckethead was in GN'R, all his friends had great nicknames, and that name came up for me. I seldom hear it anymore, or I only hear it when I'm around people associated with that era and it always makes me laugh and remember some good times.

Let me ask you about GN'R a little. We used to hear the rumor that Chinese Democracy would release 3 records before release. After all, Chinese Deocracy was released 1 record, as everybody know. Did you have any favorite song that not included in Chinese Democracy?

Chris: Yes, we did have a large collection of songs recorded through the years, and many I don't even remember now! But to think of a favorite song right now as we speak, I would have to say its one called "Beta's Barn."

Enormous thanks to MYGNR!
posted 12:23 PM