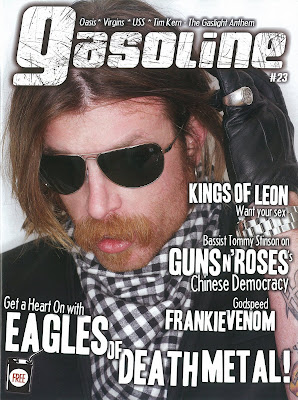 Guns N' Roses bassist Tommy Stinson sets the record straight on the most anticipated album of the decade.

"None of us could have ever gone to Axl and said, ‘Dude, I think you're taking too long.’ He had to do what he had to do to make it the right record, and only he knew in his head what that was going to be."

If you were to ask me a couple of years ago "Which do you think we'll see first — the election of the first African-American president or the release of Guns N' Roses' Chinese Democracy?" I would have put my money on the President. But since Obama will not be inaugurated until early next year, I guess, technically, I would have been wrong.

It's hard to believe, but Chinese Democracy is actually here. News of its release was impossible to escape. The Guns N'F'N' Roses publicity machine steamrolled posters across countless billboards; advertisements adorned the pages of newspapers and magazines; leaked tracks were dissected over the radio waves, and the merit of said tracks was scrutinized by diehard fans all over the Internet. You duck into your local watering hole, thinking it's a safe haven, only to find GN'R beer coasters spread out all over your table proclaiming the release date: 11/23/08. Even through all of this, though, there was a small sense of doubt about the album's arrival. But, alas, it seems that for professional recluse/perfectionist Axl Rose, it was a little too late to back out of this release date the way he has done so many times in the past.

The struggle that was Chinese Democracy started back in '94 when Axl first revealed that he had been working on the follow-up to the band's cover album The Spaghetti Incident?. After the release of such classics as Appetite For Destruction, and their magnum opuses Use Your Illusion I & II in the late 80s and early 90s, this enticing little tidbit was all it took to turn buzz surrounding a new GN'R album into a deafening roar. Axl disclosed the album's name long before any material had ever seen the light of day. Thus began the saga that is Chinese Democracy.

It's a convoluted tale spanning fourteen years. Expectations for the group's sixth studio album became so high they eventually towered at an almost unreachable height. With unmet release dates and a revolving door of musicians (including avant-garde guitarist Buckethead and punk drummer-for-hire Josh Freese), high-profile producers Moby and Bob Ezrin, among others, all eventually jumped ship. The birth of this album has been fraught with accounts of instability and infighting. however, one supporting member has been involved in the reformation of GN'R since the beginning of the Chinese Democracy debacle — Tommy Stinson, the former bassist of 80s punkers The Replacements. So, when I got my chance to interview the charismatic bass player, I just had to ask...

What took so fucking long?

"You know what? ... I don't know," Stinson divulges. "I really don't know if there was one thing. I think it was a multitude of things. That's my straight-up answer without getting into specifics, because I think if I get specific, it can be taken as sort of negative, and I don't want to go there." Inarguably, some discretion is required when talking about W. Axl Rose, a man infamous for his vicious disputes with his bandmates. But after some prying, Stinson loosens up. "I think the main thing is, we just didn't have a lot of help doing it. Geffen merged with Interscope; that definitely changed what was going down with the record. For whatever reason, because of the merger, it seems to me that that was the point when things slowed way, way, way down." 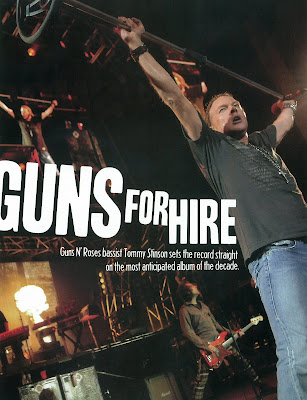 I'm reluctant to call Tommy Stinson GN'R's "new" bass player, seeing as he's been playing with the band for a decade, taking over Duff McKagan's four-strings back in 1998.

But since GN'R has only released a handful of tracks for various soundtracks in the past ten years, I guess it's only fair. [Other new recruits include Richard Fortus (rhythm guitar); Ron Thal (lead guitar); Frank Ferrer (drums); and Dizzy Reed (piano), who besides Axl Rose remains the only original member from the Use Your Illusion era.]

Now that Chinese Democracy has been released, Stinson looks at the album as two sides of a coin. "It's a little bittersweet. It took so long [to record the album], which is a drag, but the sweet thing is that it's actually out now, and people can actually check it out and judge for themselves on its worth or not." He then continues, "But ultimately for us, [the experience] was totally worth it. It turned out great, and I think it turned out right. I don't know if it would have turned out right a year ago or four years ago.

Having it produced by Axl Rose and Caram Costanzo says it all. We went to people that were put to us to help make the record, and that ultimately didn't work out. You just kind of have to wash your hands of it."

With its budget rumoured at upwards of 13 million dollars, this could arguably be the most expensive record ever made. The recoup costs alone would be enough to bankrupt a lesser band for a lifetime. There aren't many musicians that can demand and receive these kinds of grandiosities — with no deliverables and no end-date in sight — apart from Axl Rose. "They kind of left him to his own device. That's kind of the bad part about that. The record could have used a lot more help than we had. Certainly a lot more support and interaction might have been good."

Stinson continues, "I'm just glad it's out. I think whatever happened happened. Would it happen that way again? Probably not. But I think [Axl`s] passion was always in the right place. He was like, 'You know what? When I feel that it's done, that is when it is going to be done,' You can look at that any way you want. And if you're the leader of the band, it fucking falls on him anyway. Good or bad, successful or not. I think whatever he had to go through to get to that point is totally cool. There's none of us that could have ever gone to him and said, 'Dude, I think you're taking too long.' That wouldn't have made sense. He had to do what he had to do to make it the right record, and only he knew in his head what that was going to be." 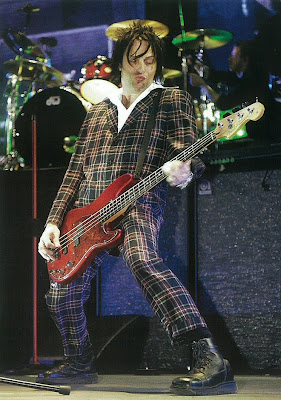 With a career that spans 30 years, Stinson has also had his fair share of hard knocks in the music industry. Stinson and his late brother, Bob Stinson, formed The Replacements when he was only 13 years old. (The band's first three records Sorry Ma, Forgot To Take Out The Trash; Hootenanny, and Let It Be were reissued last April) "It kind of got rammed into me," Stinson reminisces. "My brother saw me monkeying around on the bass once and asked me if I wanted to play, and I sad, 'Sure! Sounds kind of fun.' But it kind of hurt my fingers. I didn't really like it. He'd throw shit at me and beat up on me to get me to do it. And then he gives me fucking candy and Coke to keep playing it. I'd fucking tell our mom, and bitch that he's fucking making me do something I didn't want to do. It ended off working out pretty good, 'cause I ended up starting to like it after awhile."

The Replacements produced seven LPs and one EP before disbanding In 1991. Stinson then went on to form and front the band Bash & Pop, releasing the single "Making Me Sick" on the Clerks movie soundtrack. At his humble beginnings — being bribed with sweets for bass licks — making music a life-long career was something Stinson didn't see coming. "God no. But then again, I never thought I would live this long!" Stinson says, laughing, "To see 42 would be one of [my biggest achievements]. I've done so many things that have had little proud moments in them. The Replacements reissue thing kind of brought me back to some moments which were pretty good, but I'm still hoping for better ones."

Well, perhaps those moments are just around the horizon. Although the new GN'R line-up has played songs from Chinese Democracy at past concerts, this time it's different, The band finally has something complete and concrete to show. No more smoke and mirrors. "New" songs, such as "Catcher in the Rye" (originally written in 1999) offer infectious sing-a-long chants that recall the salad days of Use Your Illusion. It's just a shame that there aren't any whistle solos. Axl's straining and grandiose wail in the latter half of "I.R.S.", however, is certainly reminiscent to the ending of "You Could Be Mine" — although this time it sounds somewhat auto-tuned. And with the liner notes crediting seven people for "additional Pro-Tools", it could very well be. To those who are wary of the absence of any of the original band members (most of whom went on to form the now defunct Velvet Revolver) Stinson pays no mind.

"I looked at it as more of an historical challenge. The way Axl presented the whole thing to me, it was like, 'Fuck, yeah. Let's see what comes of it.' That's probably why I stuck around for this long. I'm just waiting to see how it ends up."

As are we. While fans and curious listeners clamour to hear what Axl and company have been trying to cook up all these years, the much-hyped album has also been the target of much jesting. A few years back, The Offspring tried to beat GN'R to the punch by announcing that they would name their next album Chinese Democrazy (You Snooze, You Lose), which in the end turned out to be an April Fools' joke. Instead, both singers just decided to share the same haircut. But the oddest stunt of all surrounding the release of Chinese Democracy has to be Dr. Pepper's statement that if the record saw the light of day before the end of 2008, the company would give everyone in America a free soda. Well, boo-urns to the soft drink giant, because GN'F'N'R actually managed do it!

But will Stinson be in line to cash in on this bizarre promotional freebie? "Fuck, yeah!" Stinson laughs. "The funniest thing about that is someone told me if everyone in the country cashed in their Dr. Pepper coupons, it would cost them $160 million dollars. That would be a hysterical footnote on the release of this record, right there."

great, great interview. Stinton is one of those that u're not expecting to leave. Million dollar question is: why?