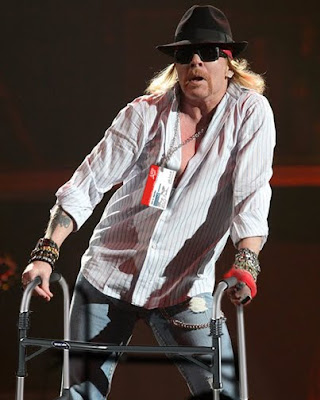 Inc.
Tactics Are the New Strategy

Strategic management can be a huge time drain for managers. Why not just ditch the conventional wisdom and go with your intuition in order to innovate once in a while?

Axl Rose is too strategic.

Like many managers who get lost in pursuit of excellence, the Guns N' Roses front man labored for 15 years producing the band's sixth album, Chinese Democracy, to mixed reviews and sales. While the album did well Internationally, was all the time and effort worth the ROI? When recording began CD's were popular. It was released to a world of Pandora, Spotify, and Rdio.

Conventional wisdom states that strategy is what matters. Managers devote an excessive amount of time developing, researching, and validating their strategy. But strategic development can also be a huge time drain. Companies get sucked into a strategy vortex and lose focus on their customer, culture, and their competition. Or they strategize too far out into the future, instead of maximizing the here and now. By the time their strategy is implemented, the market has moved elsewhere.

Those who are strategy-laden often ignore a real-world truth today. Strategy is tactics — and tactics are strategy. The Great Recession forced many corporations to throw out the old rules and experiment. And many built sales and strengthened their strategies through tactical execution. Let's look at three examples.

While researching our book Spend Shift, we noticed in Young & Rubicam Brands's quarterly panel of 16,000 consumers in BrandAsset Valuator, which examines 40,000 brands around the world, sharp increases in customer desires for "kindness and empathy" (an increase of 391 percent) between 2008 and 2010. This was the largest movement of an imagery attribute ever in our data collection. And it came at a time when trust in corporate behavior declined by 58 percent over the same time period. Customers were essentially telling companies if you want to sell to me, you better understand my life. They wanted companies to be good citizens and regard them as people who matter, not just consumption machines.

At the same time Hyundai launched its buyers reassurance program. The idea was simple: If you lose your job, you can return the car. Hyundai struggled to compete in the American marketplace. Yet with this tactic, its market share increased to 4.3 percent in the first ten months of 2009 from 3.1 percent in the same year-ago period. In September of 2009, while the industry suffered a 22 percent sales drop, Hyundai grew by 27 percent, according to Advertising Age, which named Hyundai "Marketer of The Year." And today in our BAV data, Hyundai is 24 percent more trustworthy, 26 percent higher quality and 17 percent friendlier. Hyundai's simple gesture had run headlong into the cultural zeitgeist of empathy and the market responded.

Like Hyundai, Walmart had its share of challenges. In 2008, its corporate image correlated with Exxon, Halliburton, and AIG in our data. It also responded with tactics, including its Eleven Moms program. Realizing mommy bloggers were the new 'soccer moms' in culture, Walmart asked them to act as an informal advisory board. Along with food labeling and local food sourcing, Walmart's brand image began improving. Today, Walmart is 40 percent healthier, 30 percent more energetic, and 22 percent more different.

Long associated with the decline of Detroit, Ford's resurgence came from improved quality and a renewed focus on economical and green cars. Ford's pre-crisis financial restructuring also helped it avoid Chapter 11 and provided a tactical opportunity. In our BAV polling, 56 percent of Americans said they would not support a company who took bailout money. So while GM and Chrysler were on Capitol Hill, Alan Mulally's 2009 keynoted at CES to tout its Microsoft Synch technology platform, and I wrote a post that week from Las Vegas suggesting this might bring Ford back. And in two years, brand asset value data shows that Ford is 36 percent more unique, 36 percent more intelligent, and 30 percent more innovative.

In each instance, tactics moved markets. That's because in the tug of war between strategy and tactics, they are really one and the same. A sailboat tacks (that is, changes direction) to maximize the benefit of the wind, but it keeps its destination-point fixed. Similarly, a defined strategy needs tactics to reach its destination faster. Tactics also provide tangible evidence of progress to the organization. It makes the strategy (and change) visible and real. And when strategy and tactics are intertwined, a manager can exploit competitive missteps, address crises proactively, and capitalize on ideas that emerge from cultural shifts. Learning is a byproduct of action, not inaction.

Science provides evidence that action is a trait of the most highly successful managers. Weston Agor, professor of public administration at The University of Texas at El Paso, conducted intuition tests on more than 10,000 executives. "The higher the level of management, the higher the raw ability to intuit solutions, and the more reliance placed on intuition," Agor concluded. Other researchers confirm that experts rely on their instincts during stressful situations. Chief Scientist Gary Klein studied men and women working in intensive care units, Black Hawk helicopters, fire stations, multimillion-dollar corporations, and M1 tanks. He found that these expert decision makers, from veteran firefighters to battle-tested software programmers, are unable to explain how they make decisions. "Their minds move so rapidly when they make a high-pressure decision, they can't articulate how they did it," Klein said. Instead these individuals react immediately, using instinct as a guide.

Managers should realize they've actually encoded the skills needed for fluid real-time management and should trust them more often. Instead of becoming prey to consultants and their three-year projects, they might instead do something small that might become gigantic. Act accurately, but by all means, act.

Need To Boost Your ClickBank Banner Traffic And Commissions?