Tommy Stinson: "Axl Has Not Fired Me as of Yet" 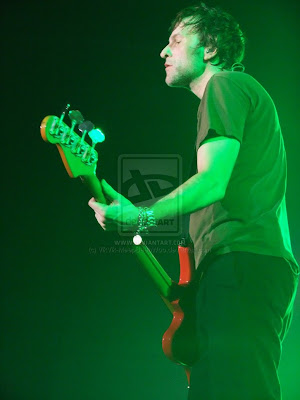 In case anyone was wondering... Axl has not fired me as of yet, and i have not quit GNR. Let's not start running amok here.

Of course, rumors of Tommy's exodus from GN'R are nothing new. Less than two months ago, Tommy tweeted (on the eve of GN'R's final gig in Abu Dhabi):

being pushed to the end of ones rope for so long will make you a good climber,or road kill. i'm gonna find a new tree

Two months before that, there was the Dublin incident, where Tommy reportedly left the stage for almost 45 minutes. A source witnessed Stinson in a heated argument with road manager Del James, where Stinson was heard to shout:

That's my fucking family up there and he put us in danger again.

He can't keep doing this. Nothing happened this time, but next time we might not be so lucky.

This has to stop.

This past November, Tommy released the track, "One Man Mutiny," which "was inspired by a conversation between ... tour manager Del James, Richard Fortus, and [Tommy Stinson] somewhere in Ireland ..."

Rumors and Guns N' Roses go hand-in-hand. Tommy has been "quitting the band" since at least 2006:

Axl has been a dear friend to me for nine years. We have no problem communicating and wish that people would stay the fuck out of shit they don't know anything about.

There was no GN'R mutiny or any such thing after the ... gig and as far as I'm concerned this tour has been the most fun yet. The band is playing great and getting along better than we ever have. With that said, either get on board or fuck off.

Tommy! Please tour the States! I have a huge bottle of piss waiting for your face!