in their own words 3 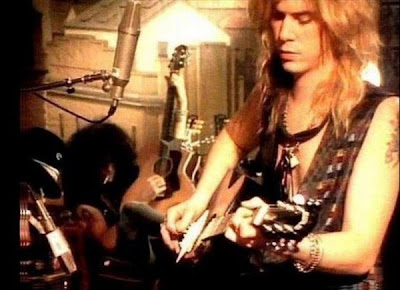 "I want to do five records in two years"

"I really think the next official Guns N' Roses record, or the next thing I do at least, will take some dramatic turns that people didn't expect and shows the growth. I don't want to be the 25-year-old misfit I was."

"You can stay in the most expensive hotels and you can be a huge rock band and have a lot of fame and recognition and all that stuff, but when you get into the rooms, toilet paper is still toilet paper."

"We were all sitting around with bits of paper trying to figure it out. Everyone came up with different numbers, but basically, we stopped counting after we got past $100 million."

"It was success that screwed us up."

"What do I think of Guns N' Roses chances of surviving? Hey, it's not my gig to weigh up other people's chances of living or dying, baby... that's what people do to me.

I used to be number one on the list of the next guy to turn into a zero, so I wouldn't dream of doing it to them. I ain't gonna judge 'em... I wish 'em all the luck in the world. they're good guys.

What can I tell you? I really feel for those guys right now 'cos it ain't the Baby Doll Lounge they're playing anymore.

Where they're dealing from, it's like Jaws out there every night."

"I'm getting more and more confused about who's in Guns N' Roses and it's blowing my mind.

-Roddy from Faith No More