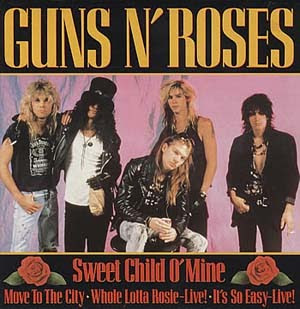 Gibson
Released in the US on August 18, 1988, “Sweet Child O’ Mine” was Guns N’ Roses’ third single from their blockbuster debut album, Appetite for Destruction.

It would go on to become Guns’ first and only #1 single in the US, as well as rack up countless high rankings on a plethora of “all-time best” lists, including #1 on Kerrang’s list of “100 Greatest Riffs,” #1 on Total Guitar’s “Greatest Riffs of All Time,” #37 on Guitar World’s “100 Greatest Guitar Solos,” and so on. The list is long.

By most accounts, “Sweet Child O’ Mine” was little more than a song born out of chance, boredom and no small amount of sheer luck. Slash, the creator of the song’s signature riff, has even been quoted as having a smidge of loving disdain for the song, relegating that classic riff into little more than a “string skipping” exercise.

During a VH1 special, the Chapeaued Shredder admitted that the riff was joke, a “circus” melody he came up with while warming up with former GN’R drummer, Steven Adler. Co-guitarist Izzy Stradlin soon joined the jam with bassist Duff McKagan, while upstairs Axl Rose heard the boys and started writing lyrics, which he based on his girlfriend at the time, former Whilhelmina model (and daughter of Don Everly of the Everly Brothers) Erin Everly.

The song originally had three verses, but producer Mike Clink convinced the band to use only two, while also including Axl’s “Where do we go? Where do we go now?” mid-song breakdown.

McKagan told Hit Parader, “It was written in five minutes. It was one of those songs, only three chords. You know that guitar lick Slash does at the beginning? It was kinda like a joke because we thought, ‘What is this song? It’s gonna be nothing. It’ll be filler on the record.’ Slash was just messing around when he first wrote that lick.”

On this day in 1988, Guns N’ Roses and their girlfriends at the time (and Izzy’s dog) went into a Huntington Beach, CA ballroom and shot the video for “Sweet Child O’ Mine.” Axl later told radio show host Eddie Trunk that his original vision for the video was one revolving around drug trafficking, where, at some point, a dead baby is involved. Good times! Geffen Records nixed that idea in a hurry.

Eventually “Sweet Child O’ Mine” was trimmed from 5:56 to 4:12 to make it more palatable to both MTV and radio, a move that bummed Axl out.

The singer told Rolling Stone in 1989, “I hate the edit of ‘Sweet Child O’ Mine.’ Radio stations said, ‘Well, your vocals aren’t cut…’ My favorite part of the song is Slash’s slow solo; it’s the heaviest part for me. There’s no reason for it to be missing except to create more space for commercials, so the radio station owners can get more advertising dollars. When you get the chopped version of ‘Paradise City’ or half of ‘Sweet Child’ and ‘Patience’ cut, you’re getting screwed.”
posted 8:05 AM

Want To Boost Your ClickBank Banner Traffic And Commissions?