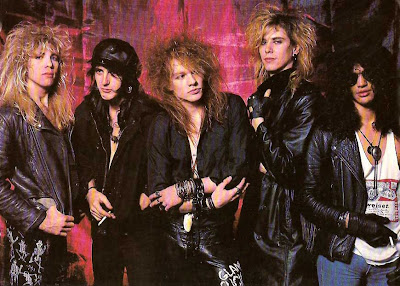 When asked what he thought the "secret formula" to Guns N' Roses success was, Adler replied, "Guns N' Roses' success, I believe, came from the fact that the five of us liked five different kinds of music.

I always liked the '70s kind of pop, disco — I was really influenced by Queen.

You've got Izzy Stradlin, who was influenced by the Stooges, New York Dolls, Sex Pistols.

And you've got Duff, who was into Black Flag... punk, real hardcore punk.

And then you've got Axl; he was into Queen, Elton John... bands like that.

And Slash was into Aerosmith, Led Zeppelin...

So it was a mixture of all of our different things. We all just meshed together really well. And believe me, it's so hard to find... Look, I'm going through it right now with my new band, Adler's Appetite. It's the hardest thing in the world to find four or five guys that you can actually live with and work with and make magic with."

In a recent interview with The Jewish Chronicle, Adler stated about his former band, "Why do you think we were so successful? Because it was the five of us. We had something special. We had a bond. No matter how much bullshit there's been all these years, there's one thing that Axl and his lawyers can never take away, and that's that we were five brothers who achieved the goals we had since before we were teenagers. And what do brothers do best? They fight with each other! I don't hate them now. My wounds are healed. It's a shame that Axl and Slash won't talk. Every day they don't talk is a day that magic isn't being created. Even if we just did one tour, one record, one song together, the gods want to hear it."

Regarding why he thinks a reunion of Guns N' Roses' classic lineup should happen, he said, "There's all the love I receive around the world. I have heard Appetite For Destruction is the soundtrack to my life' in so many languages. And there's the money we could make. The whole thing could make billions of dollars. All we have to do is get on stage with each other for 90 minutes. And I want to finish what I started. Thank God for putting these jackasses in my life."
posted 8:26 PM