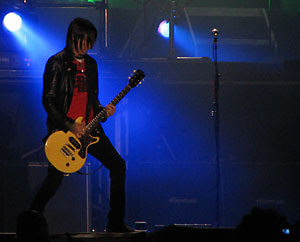 Fortus will take over after Lizzy play at Slaine Castle, Ireland, on May 28. Campbell reports: “Well, that was it: my last US show with Lizzy – and it was a great one to end on. New guitarist Richard Fortus came and played a couple of songs.

“I have one final gig with them in Ireland, and the very next day we start Def Lep rehearsals.”

Leppard are going back to work after a year’s break, and planning to write a new album while they tour for the rest of 2011. The band will play two shows with Thin Lizzy and special guest Alice Cooper in Ireland, on June 7 and 8, ahead of their appearance at the UK Download festival on June 10 – but Campbell has already ruled himself out of playing two sets on those nights, saying: “My allegiance has to be to Def Leppard.”

Frontman Axl Rose is well-known for keeping audiences waiting up to two hours. Although many of his fans feel it’s part of what makes Rose unique, it’s led to negative reactions from some quarters in the past, and can be a headache for event organisers who have to pay fines themselves if they break curfews or manage a show which could be seen to risk crowd safety.

GnR last played Rock in Rio in 2001, and hit the stage two hours late, although there were no heated scenes during the delay. But festival vice-president Robert Medina says: “It was the hardest show to arrange in our history.

“No other artist has a late clause. Bands are usually on time, but Guns is a different case. Lateness like the one in 2001 can make the public feel uncomfortable and possibly start a riot.”
posted 7:15 AM