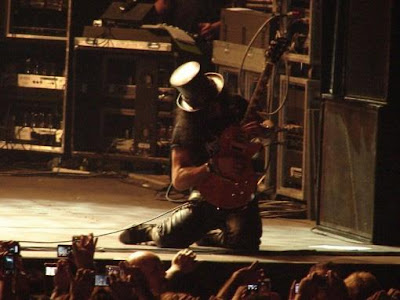 via Blabbermouth
Slash spoke to the QMI Agency earlier today (Wednesday, March 21) about the band's upcoming induction into the Rock and Roll Hall of Fame.

Slash told QMI Agency he had mixed emotions about the honor. "Either it hasn't hit me yet or maybe it's been so long since I had anything to do with Guns N' Roses that I just don't really get it," he said.

Slash said that he expects former GN'R drummer Steven Adler to be there, too. "I could be positive Steven will be there," he said. "Steven wouldn't miss it." He was less certain of the attendance of the rest of GN'R's classic lineup, specifically the band's lead singer Axl Rose. The two have not spoken in years and Rose continues to hold a hostile stance toward his former bandmate.

"I don't know," Slash said when asked if Axl will make an appearance at the induction ceremony. "I would assume so but we haven't talked about it."

Duff McKagan told RollingStone.com that there has been "no communication" about the original members of the band performing together when the group is inducted into the Rock And Roll Hall Of Fame. Asked if he knew what was going to happen at the ceremony, McKagan answered, "I don't. I know I'm going to go. I can't, at all, speak for anybody else. And won't. I'll be there with bells on." But he added, "There's been no communication about anyone playing. There was probably a day in the mid-1990s where I would have tried to gather the troops, but I'm just not that guy anymore. It's too frustrating to change anyone else . . . I'm not even sure I'd want to change how anyone else sees a situation."

On whether he hoped that the original lineup would perform together at the event, McKagan said, "I think it would be killer. Do I hope to? That's a tricky question. It would be awesome. You have those day dreams like, 'We'll go up and play 'Nightrain' and 'Brownstone' and throw down the microphone and drop off! That'll be killer!' But I doubt that'll happen."

McKagan, singer Axl Rose, guitarists Slash and Izzy Stradlin, and drummer Steven Adler will all be inducted into the Hall, along with later members, keyboardist Dizzy Reed and drummer Matt Sorum.
posted 7:20 PM