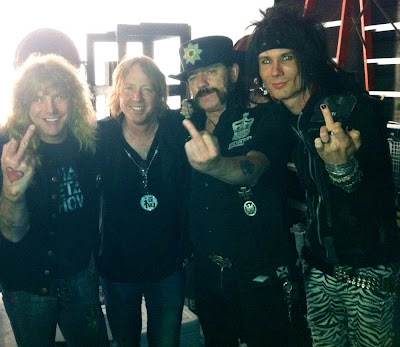 The firestorm of the Guns N’ Roses ‘will they, won’t they?’ saga continues to gather fuel as former GN’R drummer Steven Adler calls the current Guns N’ Roses lineup ‘Axl and His Hacks,’ while once again declaring his advocacy of an ‘Appetite for Destruction’-era reunion at the band’s upcoming Rock and Roll Hall of Fame induction.

We exclusively broke the news on Tuesday (March 27) that Slash “would love to” reunite at the Rock Hall induction ceremony. The next day, Adler responded to Slash’s decree by also stating that he wants the reunion to happen.

Now, in another Loudwire exclusive, we’ve got the latest update on ‘Guns-gate’ with our interview with Steven Adler, which occurred this very evening.

“If it was up to me, we would have been playing for the fans a long time ago,” says Adler. “Unfortunately, I have no say in that. I’m behind it 100 percent … 111 percent! Put it this way; if the five original GN’R guys don’t get up there and play, I’m going up there just on the drum set and playing a couple of songs from ‘Appetite for Destruction.’ It’s for the fans. To me it’s just a rock ‘n’ roll band, but it’s a rock ‘n’ roll band that I’ve gotten so much love and respect from all over the world.”

“He’s my brother. I know he’s up to it,” Adler says about Slash and the Rock Hall reunion. “He wants to do it. I want to do it. Just from what I hear, Izzy [Stradlin]‘s not gonna show up and Axl will probably want to play with his hack band — his band of hacks. ‘Axl and His Hacks’ — it shouldn’t even be Guns N’ Roses. He’s just driving that name into the freakin’ ground. ‘Axl and His Hacks.’

Adler continued, “My grandmother always said, “Time heals all wounds.” Slash and Axl are one to each other. It’s not like one of them slept with one of them’s wives or anything — and even that’s forgivable after a while. There is no reason to be upset.”