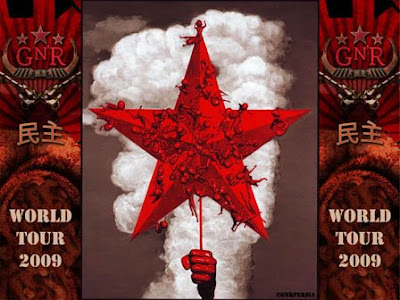 I hear that GN'R have moved into phase 2 of their rehearsals for the Chinese Democracy World Tour.

The band spent half of February and all of March auditioning guitarists in a rehearsal studio in beautiful downtown Burbank. 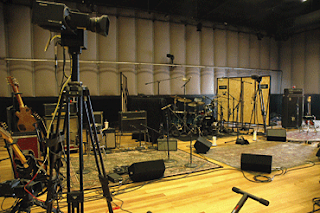 As we know former Sixx AM guitarist DJ Ashba landed the gig.

As of today, phase 2 has begun and the band is putting together their stage show in an nearby arena.

Preperations for the tour are definitely underway, and we have every reason to believe the other rumors we've heard so far are true.

As expected, the setlist will contain a mixture of old and new songs, including "Prostitute."
posted 4:29 PM

CAN'T WAIT FOR THE NEXT TOUR!!!

Prostitute? I hope they add other songs like Scraped, Rhiad, and Sorry. A bit doubtful on Scraped and Sorry since Buckethead had a huge influence on the first and Sorry seems like a "Get in the Ring/Don't Damn Me album only" song that speaks for itself.

Also seeing how they pull of Shackler's would be good.

I'm not jumping up and down, and I wonder why is that?! So much back and forth in all this drama...

I want it to be excelent and targeting new audiences. Playing with Van Halen is stupid and reveals no sense of management other than immediate cash motiv.

Arzhoff: put your money on a NIN/JA addiction type of tour. Guns n' Roses and Rose Hill Drive, for instance. Or Black Mountain. Or Porcupine Tree. Or wolfmother. There aren't so many new rock bands...

looking forward for an european tour (portugal HAS to be on it!)

Any idea on the opening act?