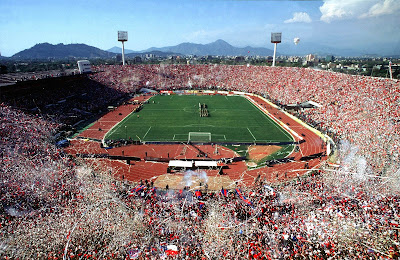 The negotiations to bring GN'R to Chile in 2009 are firm.

The problem? The availability of the National Stage.

Chilean fans of 1990s Californian Rock will have the opportunity to see a band that made history: Guns N' Roses.

A local promoter is almost finished with negotiations to bring to the group to Chile.

According to a source near the production of the event, the contract is ready and the concert already has a date: Axl Rose and company would appear in Chile this September.

GN'R would visit within the framework of a world-wide tour in support of its new album Chinese Democracy.

But one detail is missong. This is nothing less than the lack of an agreed venue for the Mega-band.

Everything depends on if the promoter is able to rent the National Stage, which has closed its doors to concerts in favor of sport events.

The decision has forced the promoters of massive concerts, to establish meetings with government authorities so that the Stadium can be used. If not, we are afraid that Chile will leave the circuit of big concerts.

Yesterday, nevertheless, there was at least a meeting between the two parties.

Promoter Francisco Goñi met with the undersecretary of Sports, Jaime Pizarro, and with the head of cabinet Minister Carolina Tohá.

"We felt listened to," Goñi said of the meeting when coming out, and without going into detail regarding the content of the discussion, said that "we are keeping the talks private."

Goñi is looking for flexibility regarding the use of the Coliseum, with the purpose of allowing the Jonas Brothers concert to move from the Athletic Track to the Stadium or, at least, that the door is open so that future events can be realised there.

There is serious negotiations to bring to Chile U2, AC/DC, Coldplay and Britney Spears.

"When we get an answer we'll let you know" , Goñi said regarding a possible definitive decision by the authorities, that are now analyzing the arguments presented and displayed by the promoters to determine if they can authorize the use of the National Stadium for concerts.

Until now the sport leaders have been the main impediment of using the stage for concerts, arguing that the turf could be ruined by a concert.

Nevertheless, promoters are trying to assure sports leaders that has not happened at recent events and that, when damages have taken place, they have cooperated with the authorities.
posted 9:58 AM

I so love that. I'm going to make the leap to a South American tour in the works.

I think that's a safe bet and it would be a smart move by GN'R.