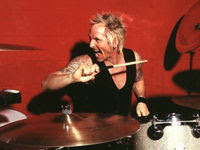 Joe Bosso over at Music Radar always gets the best scoops:

"We need a singer soon," Velvet Revolver drummer Matt Sorum told MusicRadar in an exclusive interview. "We need the right guy in six months. We can't wait another year. Otherwise, it might not matter."

Sorum told MusicRadar that the band was recently close to deciding on a singer, whose identity he declined to reveal ("I want to protect him"), but after a few recording sessions, both he and various band members ultimately decided it wasn't the right fit.

"The way I like to put it is, we were 'dating,' says Sorum, chuckling. "We had already tried out Spacehog's Royston Langdon - came close there. Then we tried out a few more people, including this guy from Canada [Gord Prior], but nobody seemed appropriate. Then we found this other dude..."

"There was something missing in the swagger department. He felt like a slam-dunk at first, and then he didn't" Matt Sorum on the unnamed singer Velvet Revolver almost chose

Sorum heaves a sigh, seemingly deflated at what might have been. "This guy felt like he could be the one. So I took him into my studio and recorded his vocals over a bunch of instrumentals we have. Immediately, he blew me away. 'This is the guy!' I told myself. I was on top of the world."

Sorum describes the unnamed singer as being "way more rock 'n' roll than Scott Weiland. The guy almost had a Chris Cornell/Phil Lynott thing going on - he could really bring it, you know?"

After one recording session, Sorum and various Velvet Revolver band members were over the moon. "It seemed like a slam-dunk," says Sorum. But a second session proved disappointing. "The guy gave maybe 70 percent of what he had before. It was very sad. Already it was a case of diminishing returns, and you shouldn't get that so quickly, especially from a guy who really wants the gig."

According to Sorum, "There was something missing in the swagger department. His vocals were great, but the attitude, it wasn't really there, not all the way at least. Plus, I played his recordings for my girlfriend and a couple of friends and I didn't get the reaction I was hoping for. Nobody went 'Holy shit, that's amazing!' That really sent signals to me that something was wrong."

Although Velvet Revolver's 2004 debut album Contraband went platinum, Sorum now says, "We made a mistake with Scott Weiland. Even though he had a cool swagger about him, he was never 100 percent live. He was hit-and-miss when it came to performing, and eventually it became more 'miss' than 'hit.'

"When Weiland announced his decision to split the band ("He quit before we could fire him." says Sorum), the remaining Velvet Revolver members figured it wouldn't take long to find a suitable replacement. A year later, they're still looking.

"I'm shocked that we're still without a singer," says Sorum. "But if we're going to do this again, we have to find the guy who blows people away. Otherwise, why bother? We can do other things. I'm not saying we want to do other things - we'd much rather be doing a Velvet Revolver album or tour right now - but if it's not going to be awesome…"

"Face it: people forget. Contraband did great, Libertad did less well. We have to come back stronger than ever, or else we might be looking around for other bands, and nobody wants that. We're still very committed to Velvet Revolver."
posted 1:04 AM

I hope they do get a new singer who can bring the best out of Slash, Duff, Matt and Dave.

I guess with Slash doing work on his solo album, and Duff promoting the new Loaded album, we could be looking at next year before we even have word of a new Velvet Revolver album?