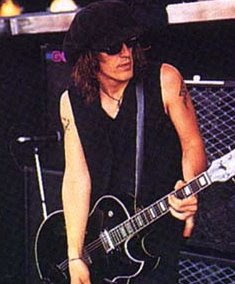 I am always on the hunt for Izzy Stradlin news.

Last week I found this "story" on the 10ZenMonkeys website:

Japan has a reputation for searching rock stars for drugs.

So when Guns N' Roses guitarist Izzy Stradlin was warned by his manager to get rid of any drugs he might have before going through customers in Japan, Stradlin put them someplace he knew he wouldn't lose them — in his stomach.

He must have had quite a stash, because he wound up in a coma for 96 hours.

I don't know how accurate this story is, if it's true, or if it really deserves to be mentioned on a "best of" list - because it's just not that great of a story.

However, this is a great story:

It seemed like a good idea at the time - saying hello to his father's dog chained there in the front yard.

His affections enhanced by a goodly portion of brew, Izzy Stradlin leaned over and bared his teeth in a big smile. The dog in turn put his teeth through Izzy's face.

It was a bad omen for Stradlin's flight to Phoenix later that day. Sitting in his airplane seat, with a hole through his nostril and another hole through his eyebrow, he couldn't figure it out.

And yet ... his luck was growing inexplicably worse. He summoned the one proven method for dealing with such cruel irony: double Bacardi and Cokes, of which he downed several while smoking and enlightening the attendants with detailed critiques of their service.

Days later, he would find himself wishing that someone had just hit him, adding a black eye to his mangled features, adding a little more throb in his skull. As it was, he answered the call of nature.

Finding the lavatories occupied, he drained his nature in a trash bin in full view of a stewardess. Nothing was said at the time, so Stradlin returned to his seat where he passed out until touchdown.

Exiting the plane, he was suddenly surrounded by 12 cops and arrested. Thus another set of headlines for Guns N' Roses and another year of probation for Izzy Stradlin, who'd pretty much had his fill of probation from a drug bust in the mid-80's.

Thanks to ChopAway.com for the "Snake on a Plane" story.
posted 6:18 PM