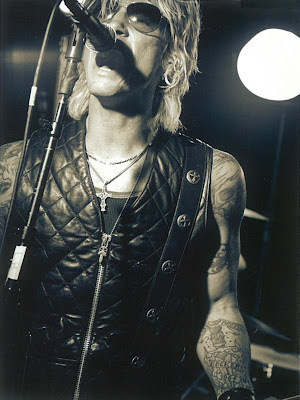 RockAAA.com
Duff McKagan says he has never had any personal problems with Axl Rose and the cracks which formed, and eventually tore Guns N' Roses apart, were deliberately created by lawyers looking to make a quick buck.

The bassist quit GN'R in 1997, following in the footsteps of Slash and Izzy Stradlin, leaving Axl as the only classic line-up member remaining.

But he reveals the whole situation was created by outside influences and not by any disagreement or personal issue between the band and Axl. He told AV Club:

"I never had a personal beef with Axl, truth be told. Lawyers and stuff in that instance, it was kind of treacherous. They make money and try to create enemies between clients.

I wish they'd teach that course. If there was a rock 'n' roll textbook, I could add some shit to it, real valuable shit. We were torn apart by people who weren't in the band, and that's really what always happens.

Same thing, in a way, that happened with Velvet Revolver. When you gotta have managers and agents, you can’t protect everyone from addiction. And it's addiction, you know? It’s a modern world we live in, with everything at our fingertips, and if it’s not at our fingertips, you can dot-com anything."

On the subject of Velvet Revolver's split with singer Scott Weiland, McKagan insists that can simply be put down to addiction. He continued:

"Scott's thing was substance-related, and I’m not throwing him under the bus. It's pretty well-documented.

It wasn't like, 'You’re a fucking dick.' Scott and I especially went through a lot of stuff in that band together. I went up to the mountains with him in Washington and we did martial arts and did some soul-searching together, just him and me. He didn't let me down. I'm fine, you know? I still care for him very much, and always will.

We're bros when it comes down to it, and that's it. We were having a hell of a hard time working together at the end. It wouldn’t come to blows, but it was just difficult when certain elements came back into the picture, but we’re all good."
posted 11:45 AM