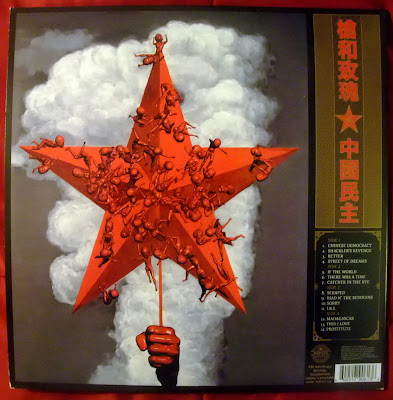 AV Club recently conducted an interview with Tommy Stinson. An excerpt from the chat follows below.

AV Club: How did you end up with GN'R?

Stinson: It was kind of a fluke. A friend of mine, Josh Freese, was playing drums with them, and I asked him what he was up to, and he was like, "Oh, fuck, I can't really talk about it, but I'll tell you anyway." And it turned out he was playing drums, and working on the record. He said, "It's funny that you're asking me, because Duff McKagan just quit, and we need a bass player." I was just joking with him: "Oh, that would be a fucking hoot," given my thoughts about Guns N' Roses at that time. But I did it anyway just as a laugh, and it turned out pretty good. They didn't really audition anyone else. They liked me, and because Josh was doing it, it was a compelling notion. At the time, coincidentally, I was about to get kind of screwed by yet another record label with the PERFECT record. I felt like, "You know what? This is enough." It's been five years of trying to get this thing going, I keep getting screwed, and I just want a break. So I looked at it as something to do until I figured out my next move. And it worked out pretty good, all things considered.

AV Club: Chinese Democracy took all of 10 years to make. What was the recording process like? I mean, you couldn't have been working at it every day for 10 years.

Stinson: At first we were in there a lot. We were working on the writing aspect of it, but it just kept going on. We had Interscope chairman Jimmy Iovine intervening in a not-so-productive way, and we had other guys coming and going with nutty ideas. My summation of the whole thing is that Interscope, when they took over Geffen, really led Axl Rose to believe that Jimmy Iovine would be involved, and would help get this record done and make it happen. But basically what he did was let it completely fall apart. Then he had this great idea to bring in producer Roy Thomas Baker to make it sound better. All he did was re-record everything three or four different times, trying to make it sound like something it didn't need to sound like, and spend $10 million in the process. My two cents on the whole thing is that I really think Jimmy Iovine fucked the whole thing up. It was a bummer. Most of the songs that are on the record now were done 10 fucking years ago. But all the talking heads in the mix were saying, "Make 'em sound better! Make 'em sound better!" So we kept re-doing this and that. And it ended up coming back down to the same fucking songs that they were 10 years ago, except that now they were a super-dense mishmash of a bunch of instrumentation. That whole era pretty much sums up what happened to the record industry. Those kinds of people, making those kinds of decisions and not really helping the artist.

Read the entire interview from the AV Club here.