"Slash isn’t a person. He’s more like a feeling in your heart." 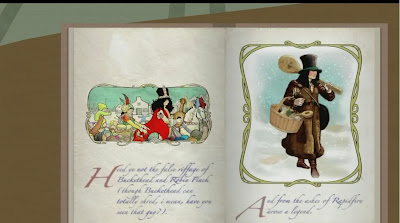 AV Club
One of South Park’s strengths is that no matter how close to downright preachy its satire can sometimes be, it can always make up for any hint of self-seriousness with something completely, cartoonishly ludicrous. For example, the proposition that well-known rock guitarist Slash is actually a mythical character based on the ancient Dutch legend of "Vunder Slash," and whose participation in everything from Cartman’s birthday party to his entire tenure in Guns N' Roses can be explained away as somebody’s parent donning a hat and wig just to bring a little love into the world. To name another example, a hot tub filled with KFC gravy. It’s often these little things that keep South Park’s satire from turning into full-bore sermonizing, and thankfully tonight had a lot of them.

You wouldn’t think that an episode based on the premise of Cartman luring Kyle into the seedy underground world of crack baby basketball — a sport that, as its name suggests, consists entirely of malnourished crack babies tussling over a little ball filled with cocaine — would need any further leavening, but let’s get our one minor criticism out of the way first. “Crack Baby Athletic Association” was such a direct commentary on the NCAA and its treatment of college athletes that the episode couldn’t help but get on its soapbox a little. And that moment came approximately halfway through, when Cartman adopted his Southern alter ego “Eric P. Cartman” (as the Dukes Of Hazzard taught us, all it takes is adding the middle initial “P.” to make you sound like a pompous hick) and stormed the dean’s office at the University of Colorado Boulder to inquire pointedly about the “slaves” on its basketball team.

Now, saying that this scene bordered on preachy isn’t a knock on its message: Many have argued that college athletes do tend to get royally screwed by their institutions — all of which make a huge profit off of everything from ticket sales to licensing deals while the people actually doing the work are expressly forbidden from making a dime — and there’s every reason to stick it to the NCAA in this regard. And it’s not even a knock on how overall funny the scene was, as Cartman certainly made for a fine plantation owner (“Screw you, sirruh, I’m a-goin’ home”), and his switch to a conspiratorial whisper as he asked the dean flat out how he got away with it had its own mischievous, Bugs Bunny-esque charm. But this scene, combined with Kyle’s repeated, one-sided attempts at justifying the league for all the attention it brought to otherwise-ignored crack babies (the scholarships and potential NBA pathways provided to college athletes, in other words), made “Crack Baby Athletic Association” a particularly talky episode, one that seemed unwilling to leave anything to subtlety, lest anyone miss the fact that, yes, it was definitely about the NCAA.

Luckily it didn’t apply that blunt pressure everywhere: “CBAA” was far slyer in the scene where Kyle proposes building an orphanage for their exploited crack babies, and Cartman rejoices because it will look like they’re also giving their athletes “a place to live and grow for a few years” as a trade-off. And Cartman’s visit to an expectant crack mother as he lays out his hoop dreams for her unborn child got right to the heart of the bureaucratic nonsense of the matter, with Cartman explaining he couldn’t very well change the rules of the “historic franchise” of crack baby basketball, founded 12 long days ago, because he didn’t make the rules — he just thought them up and wrote them down. (Less poignant but much funnier was Cartman’s incredulous response to amending them on his office whiteboard: “What do you want me to do—find a stepladder of some kind and risk my safety to get up there and change the rules?”) These went a long way toward keeping the episode from being completely heavy-handed.

And again, while the episode tended to grind on its message, it was abated by some especially top-notch ridiculousness — particularly the subplot about Clyde and Craig discovering the truth about Slash, which I’m guessing will end up outshining even the crack babies and the digs at the NCAA to be this episode’s most lasting legacy. For good reason, too: Casting Slash as a benevolent, omnipresent, Santa-like figure is one of the show’s greatest celebrity alternate realities since it brought in Mel Gibson as a poop-smearing masochist, or revealed that Robert Smith is capable of transforming into a giant moth. (Hopefully it will think to bring Slash back for a proper Christmas episode). Plus, it explains so much about why Slash ever agreed to play with the Black Eyed Peas at the Super Bowl; knowing that it was probably just my dad in a top hat will make me sleep a little sounder tonight.

I also enjoyed Cartman’s surprisingly easy beguiling of Kyle, who’s seduced by a whirlwind of flashy karaoke club sequences, some smooth “the world is ours for the taking” talk straight out of Wall Street or Boiler Room (or The Social Network, for you young’uns), and the irresistible lure of bacon pancakes. Like the crumbling of his kosherness in the face of so much delicious bacon, Kyle’s rare step away from his usual moral standards, though it initially seemed out of character, was one of the more nuanced aspects of the episode, proving that the argument really isn’t so cut and dry as “college athletes are slaves,” and allowing that there are at least a few more angles to it than that, including the obvious (and defensible) belief of recruiters that they're actually doing some good. Again, I didn’t love that Kyle simply talked through these ideas in long, circuitous monologues, but I did like Stan’s pointed non-reaction to them—or better yet, his trenchant remark that Kyle was saying exactly what Cartman would say, spurring Kyle’s terrible self-realization that indeed he, too, could be corruptible. In the world of South Park, tiny moments like these actually count as big leaps forward in characterization.

Finally, you have to admire the way things wrapped up both appropriately thematic and totally absurd, beginning with the tables being turned and the boys falling prey to the even more underhanded contract dealings of EA Sports and its own ruthless slaveowner-like manager.

Screwed out of so much as a free copy of the videogame they’d helped to create according to the company’s equally irrational rules, Cartman and the other managers of the Crack Baby Athletic Association are left with nothing but the cold comfort that they briefly “got to play with the big boys,” and maybe the knowledge that they learned a lesson or two of their own about trusting corporations and always reading your contracts carefully.

But rather than dwell on this with an “I learned something today” speech — a conceit South Park seems to have totally dropped this season — things came to a close with a last-minute intervention from Slash, who was revealed to have created the crack baby orphanage anyway, out of the love and caring that he stands for (or did he?).

And thus, “CBAA” ended things by having it both ways, hitting its message hard one last time, then veering wildly away to a magical place where Slash watches over us from the stars. If not quite the gleefully escalating lunacy of last week, it was another solid balance of satire, character, and hilariously stupid shit.
posted 1:12 PM