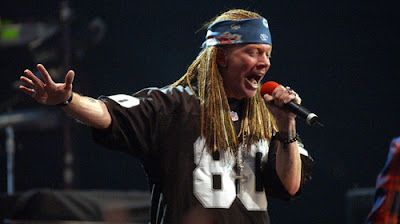 JOE.IE
Former All-Ireland winning captain Graham Geraghty is back in the Meath panel. He’s 38. He hasn’t played inter-county football in three years. This can only end badly – here are five other disastrous comebacks.

Once the darling of TV-land, who strode up and down those Strike It Lucky steps with grace and sent audiences into peals of laughter with a knowing raise of an eyebrow, Barrymore’s career has been stranded in purgatory for ten years.

Amazingly, he’s still only 58, but he’s been off the scene since 2001, when the whole house of cards having come tumbling down following the discovery of the dead body of Stuart Lubbock in his swimming pool.

Barrymore’s latest attempt at a career revival in a stand-up show at London’s Comedy Story earlier this year ended in embarrassment, with one comedy fan telling the Daily Mirror: “It was tragic. He was a complete mess.”

Axl Rose & Co had enjoyed almost a decade at the top of their game – through hits such as "Sweet Child of Mine," "Patience," "Paradise City" and "Smells Like Teen Spirit." (Joking, we’re joking. We know that was Metallica. Or maybe Megadeth.)

They drifted off the scene in 1993 but Rose always remained hopeful of pocketing a few more zillions returning to the top of his game. Then, in 2002, albeit without Slash, the enigmatic guitarist who to many was every bit as vital a member of the band, it happened.

Only it didn’t. On the eve of the planned opening show of the band’s first North American tour in nine years, Rose having opted against leaving LA for Vancouver, the concert was cancelled and fans rioted in previously sleepy Canadian streets. Another riot followed in Philadelphia and the remainder of the tour was cancelled.

Rose and his ever-changing troupe of drummers, bassists, backing singers and back-rubbers are still together, although these days they're more likely to be pelted with missiles from angry former fans than put on a showstopping performance.

And through it all, they’ve long since become an artistic relic, albeit a pleasant reminder of happier times when we could all vomit, in public and without danger of embarrassment or recrimination, in a big field in Co Meath.

Once the best tennis player on the planet, the winner of 11 Grand Slam titles, Borg hung up his headband and racquet in 1983, whereupon he took to the exhibition circuit, lived on his own island, divorced one woman, fathered a child with a second and married a third.

Fed up with all that boring stuff, he returned to competitive action in the 1990s but was blown out of the water, losing 12 successive matches before being sent spinning back into retirement with his pony-tail between his legs.

Here was a woman who could stir carnal instincts in the most reserved of folk. Whitney, circa 1992, was so great that my old English teacher, a bookish man whose energies were otherwise devoted to Shakespeare and John Betjeman, named a tie in her honour.

However, a lasting dalliance with hard drugs and Bobby Brown – of which we’re not really sure which was the more negative influence – proved her undoing.

She still sings, and she still sings well enough, in a backroom karaoke sort of way. But the dancing eyes and the glass-shattering notes of The Bodyguard are long since gone.

For so many years, Fallon’s career followed the path of the GAA's highest achievers. Breaks into the inter-county team in his teens. Becomes captain in the early 20s. All-Ireland winner at 25.

The Tuam man with the exaggerated sidestep won a second All-Ireland three years later in 2001, but even if Galway’s fortunes dipped slightly thereafter, here was a man who could slip towards retirement with his head held high. Which he did, before he followed the natural course into the backroom team as a selector in Peter Ford’s management team.

Then, in 2006, came the bombshell that Fallon was resigning that position to make himself available for selection again, and he was immediately restored to the starting line-up, with Ford declaring that his former sidekick had “kept himself fit in the gym”. Unfortunately, he hadn’t drank enough milk and his collarbone snapped after 20 minutes' football. In 2007, he retired again, this time for good.

Fallon was just 33 when he returned to inter-county GAA, and misery ensued. Geraghty is 38. This, surely, can’t go well. Can it?
posted 11:39 AM