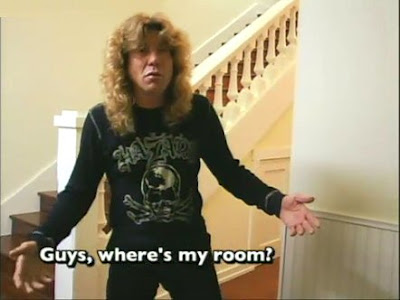 via Blabbermouth
Aerosmith frontman Steven Tyler has slammed the VH1 reality series Celebrity Rehab With Dr. Drew and its host, addiction-medicine specialist Dr. Drew Pinsky, who formerly worked at one of the hospitals where Tyler sought treatment.

In his new book, Does The Noise In My Head Bother You?, Tyler claims that former GN'R drummer Steven Adler, a patient at Las Encinas (where Celebrity Rehab was filmed), was asked to fake his behavior for the benefit of the cameras.

"They wanted him to act out his own messed-up state when he entered rehab. It was ghoulish and unreal. They gave him 30 grand for the episode, he snorted it all, crashed his car, and he ended up in jail detox," Tyler wrote.

Adler appeared on season two of Rehab and the first season of the spin-off show Sober House back in late 2008 and early 2009. Adler then went on to stints in real rehab centers after being ordered to by a judge as part of a DUI bust.

Tyler added, "It didn't seem to me all that ethical using actual fucked-up people like Steven Adler in a reality show, but who am I to say? Not to mention getting trashed celebrities to mime their own self-destructive nosedives which they then sensationalize on a melo-fucking-dramatic reality show, which so traumatizes them they end up in worse shape than ever — from the drugs they bought with the money from the show."

Adler recently confirmed that he joined the cast of Celebrity Rehab With Dr. Drew for another season. Also scheduled to appear on the show's Season 5 are Michael Lohan, Jeremy Jackson, Dwight Gooden, Michaele Salahi and Bai Ling.

Previous seasons of Celebrity Rehab With Dr. Drew have featured celebrity patients undergoing detoxification and treatment at a center in the Los Angeles area. The series chronicle the patients' intensive 21-day program with both group and one-on-one therapy and non-traditional therapies like art and music. Returning to the show to help Dr. Drew are expected to be drug counselor Bob Forrest and resident technician Shelly Sprague who have each spent years on both sides of the rehab fence. After they complete the program, the patients will be strongly encouraged to continue their treatment in a sober living facility or treatment center for at least three months at VH1's expense.

Celebrity Rehab Presents Sober House included footage of Adler being arrested on July 18, 2008 after he showed up at a sober-living home high and in possession of heroin, and could barely stand up because he was so blitzed.
posted 10:42 AM

In my opinion, and I dare to assure it, Aerosmith is the best rock and roll band of all times. And Steven Tyler is certainly the best lead singer. This book tells a huge part of his personal life, it shows what's in his mind, even there's so much, much more inside of him he can't tell because it's a lot of information and maybe becuase it's too personal.