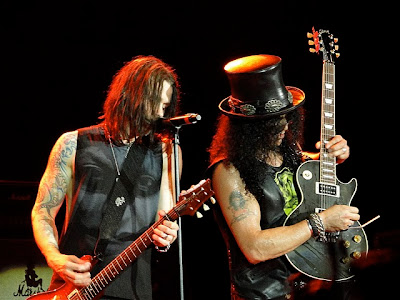 Virtual Festivals
Slash and Myles Kennedy have been added to the bill for this year's High Voltage Festival.

Slash will make his only UK festival appearance of the year at the event, which takes place at Victoria Park on July 23-24.

Last week, Slash announced via his twitter account that things were "really coming together in the writing process for the next record," and that he's going to do "a more comprehensive tour of Canada" on his next tour. Slash and Myles will also be playing Stoke-on-Trent this July.

Judas Priest and Dream Theater will headline the High Voltage Festival, with Black Country Communion, Jethro Tull, Queensryche, Thunder and Thin Lizzy among the other acts set to appear.

Weekend Tickets are onsale now, priced at £99, with day tickets costing £56.50 per day. There's also a deposit scheme available, with the final payment due on July 1.

I'm sure Myles is a nice guy but I really can't stand his singing. It's like nails on a chalkboard to me.