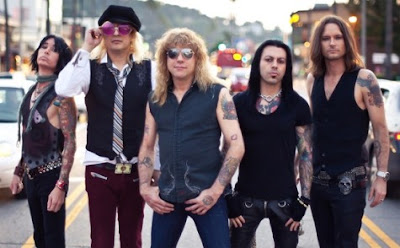 On May 17, Steven Adler will hold a press conference and book signing at Hollywood Soundcheck (located at 8872 Sunset Blvd) next to The Viper Room. Also on May 17, Steven Adler will reveal that he is joining forces with The Ultimate Warrior – the former WWF champion and first to beat Hulk Hogan at WrestleMania VI in 1990. Furthermore, Adler will announce details of “a big television show and major record deal” at Hollywood Soundcheck.

In a rather ironic twist of fate, last year Adler’s Appetite worked with producer and Cinderella drummer Fred Coury – who in 1987 sat in for Steven at a handful of Guns N’ Roses shows when he broke his hand. “Yes I did. I hit Nikki Sixx’s face a good 10 or 15 times. But Fred Coury only produced two demo songs, "Stardog" and "Fading," which are on iTunes right now. I love Fred Coury. He’s a great drummer, a great person, a great producer and maybe I might do some more stuff with him later on. But right now we have somebody else in mind, a huge industry giant. I can’t mention anybody yet. But on May 17th at Hollywood Soundcheck, right next door to The Viper Room on Sunset Blvd., I’m going to be doing a book signing and that’s when I’m going to be able to talk about everything with the record, the band, who’s going to produce it and the record deal. It’ll be a big press conference; I’m very excited about that" says Adler.

You can watch a video below of Chip Z'Nuff talking about how Adler's Appetite has signed a "massive" record deal, which includes a huge advance, and a gigantic record produced by someone like Rick Rubin.

Thanks to FunkyMonkey for the find.
posted 8:26 PM

Good for you Stevie!