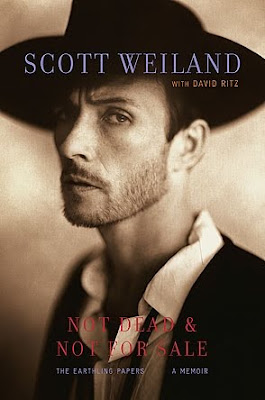 Rolling Stone
Excerpt from Not Dead and Not for Sale, Weiland's forthcoming memoir.

Slipping and sliding, peeping and hiding.

Basically, the story was that Mary had cleaned up and I hadn't. I was strung out and fucked up. Mary wanted out of the marriage — the agony of our divorce went on for years — but Mary still took an interest in my career. Always has. Always will. Ka-ching. Ka-ching.

She said she'd been hanging with Susan McKagan, a former swimsuit supermodel and wife of Duff, the bass player with Guns N' Roses when the group was at its height. Susan told Mary that three guys from GNR — Duff on bass, Matt Sorum on drums, and Slash on guitar — had formed a band. Initially, Izzy Stradlin was in, but soon opted out. David Kushner from Wasted Youth took his place.

"They put some songs on a CD that they want you to hear," Mary said. "They think you'll like what they're doing."

I didn't. It sounded like Bad Company-styled classic rock. And I never liked Bad Company. But being a nice guy, I said, "There's some stuff that's okay, but just send me another disc when you have a few new songs."

A week or so later, another CD arrived with songs custom-designed for me. The tunes had STP written all over them.

Duff called and said, "Hey, man, just drop by the studio." I knew Duff from the gym, and I said I'd try. I still wasn't sure whether I wanted to hook up with these guys.

The money attracted me.

My managers, pushing me to join this band, said, "They're going to cover Pink Floyd's 'Money' for a new movie called The Italian Job. And then Ang Lee wants songs for his remake of The Hulk. This is going to be a hot band. Just give it a chance."

I reluctantly agreed. The idea was just to jam. Couldn't hurt to see if there was any chemistry. Meanwhile, I was still hurting chemically. I was still shooting dope. That's the reason I showed up many hours late.

When I arrived, I was shocked. The guys had set up a major industry event. All sorts of music execs were there. It was being billed as an announcement of "Guns N' Roses with Scott Weiland" and made to look like a done deal, not just a casual jam. I was confused, and, because of my drug habit, I was also a wreck. But what the fuck, I was there and might as well sing.

We sang two songs — "Set Me Free" for The Hulk and the cover of "Money." I was blown away by the powerful chemistry between us. So was everyone else. These guys attacked rock and roll like a street gang. I liked their ferocity and balls-out commitment. Besides, looking over and seeing Slash playing beside me — Slash, who'd been an idol of mine back in the eighties — was a thrill. I knew Dave Kushner from the Electric Love Hogs, an underground rock band. Back in the day, STP had aspired to be on the Love Hogs level. I remember seeing them at English Acid, a hip spot in West Hollywood. I also knew Matt Sorum from rehab; he and I had been in together.

Fact is, I had a lot in common with these guys. We'd been down the dark alleys, gotten mugged, stumbled, fell, and got back up. When I hooked up with them, they were looking good. Through martial arts, Duff had put together eight years of sobriety. Matt had six years. And Dave had over a dozen years. When they saw my strung-out condition, they vowed to do everything in their power to help.

I went back to rehab but rehab didn't work. That's when Duff started talking about his trainer in Lake Chelan, Washington State. "Bring your detox meds and come up there with me," Duff offered. "You'll meet my martial arts master, one guy who can really help you."

His help came quickly and powerfully. His name is Sifu Joseph Simonet, and he's a master of six different martial arts forms. I planned to stay a month but stayed for three. At his Wind and Rock training facility, I also worked with his associate and fiancée at the time, Addy Hernandez, a kickboxer and holder of a black belt in kenpo karate. Sifu Simonet comes from a kung fu background in addition to the art form of Pentjak Silat Tongkat Serak. He created his own form called Key Fighting Concepts and, from day one, I related to his energy. He's a deeply wise man with a bit of a temper and a flair for martial arts instruction and philosophical riffing.

"My art form never stops evolving," he likes to say. "I can never repeat myself because the past is gone and the present is ever new, ever changing."

With intense daily training, I learned to channel my aggression, confusion, fear, and athleticism in positive directions. The rigorous routine allowed me to wean myself off opiates. The setting also helped. Lake Chelan Valley sits in the center of the magnificent North Cascades National Forest. The lake is a breathtakingly beautiful fifty-mile, glacier-fed body of crystal-clean water. Nature is untamed. Bears and wild goats roam the mountains. I fell in love with the area and decided to buy land there and, in time, build a cabin in the woods.

Back in Los Angeles, I hooked up with Benny "the Jet" Urquidez, a five-time world-champion kickboxer. Benny boasts that he has never been defeated, and when you train with him, you don't doubt it. He was my instructor for eighteen months after I returned from Lake Chelan. This was a difficult period — around 2006 — because Mary and I were still doing a death dance around our marriage. I'd walk into Benny's dojo — his karate gym — and right away Benny could read my mind.

"You're depressed," he'd say. "The energy between you and your wife has turned especially toxic this week."

Then Benny would start to explain the concept of being "glazed." He said that obviously anyone can incur physical injury. But once you're glazed, you're mentally and spiritually protected from harm. The glaze resists negative thoughts. Of course, like everyone, you will be affected by external circumstances, feelings, and moods, but the impact will be minimal because of the strength of your spiritual and mental muscles.

Ready to walk back into the world a whole man, ready to accept the world on its own terms.

Ready to get out there, join up with a balls-out rock band, and reinvent myself as a singer and artist.

It was going to work.

It had to work.

And then it didn't.

Back in 2003, after I joined Velvet Revolver and got straight, I wrote all the lyrics and all of the melodies for our first album, Contraband, which wound up selling over four million copies. The big hit was "Fall to Pieces." Duff and I wrote it at Lavish, the studio I built in Burbank. It was built on a riff by Slash, and somehow in the middle of the night we turned it into a song about coming to terms — or not coming to terms — with my heroin addiction. It was also about my relationship with Mary, and how it was falling apart. When Mary wrote her memoir last year, she titled it Fall to Pieces. In the song, I sang . . .

All the years I've tried
With more to go
Will the memories die?
I'm waiting
Will I find you?
Can I find you?
We're falling down
I'm falling

We went on the road for two years, toured the world, and established ourselves as a premier rock band. Velvet Revolver was a powerful force. There was so much energy on that stage that at times it felt absolutely combustible. Anything could happen at any time. We were a bunch of renegades held together by a rough passion that none of us completely understood. We were dangerous. We were on a runaway train, and audiences were drawn to our breakneck speed.

I liked our first record but can't call it the music of my soul. There was a certain commercial calculation behind it. We wanted hits; we wanted to prove that, independent of Guns N' Roses and STP, we could make a big splash. And we did. My fellow STPers — Robert, Dean, and Eric — tried a number of musical configurations without me, but none of them were successful. I wished them well, but I have to confess that, as a competitive guy, I wasn't displeased to be in a new band that fans were flocking to see.