Axl Rose: Do You Know Where You Are? 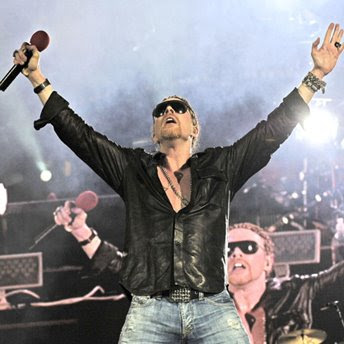 John over at Addictive Thoughts has written a sad and thought-provoking article addressing Axl Rose and Chinese Democracy. An excerpt follows.

In 1999, Axl Rose spoke with MTV’s Kurt Loder over the phone. Their discussion centered on the inevitable: the former rock star’s withdrawal from the public eye and the details of his pending record, 2000 Intentions, which Rose claimed had just received a new working title: Chinese Democracy.

Over the span of the following decade, these two words would take on an immeasurable notoriety and inadvertently come to represent the decay of the traditional music industry. If Guns N’ Roses’ early career – with the band’s all-time-best-selling debut album — was representative of the old industry’s peaks, Chinese Democracy would signify the final nail in its coffin.

One can’t help but wonder what, exactly, the effect of Chinese Democracy might have been if it had been released in 1999; after all, this was the year nu metal arguably hit its commercial zenith, with the likes of KoRn and Limp Bizkit roaring across the airwaves. (I need not point out how insufferable this era was.) Most classic rock bands were dead; the era of cash-grab reunions had yet to begin, since the grunge movement hadn’t exactly reinstated rock ideals; and some of the last groups of the alt-rock movement in the ‘90s were on the cusp of extinction. Legitimate rock n’ roll was, quite suddenly, in high demand.

If Rose had released it in 1999, before the age of Internet piracy and before the New York scene ostensibly brought back “real” rock n’ roll, his work could have lived up to its status. He could, indeed, have been remembered as not only the singular force in the resurrection of classic rock music, but even as the last true superstar prior to the downfall of the music industry.

Of course, that’s just wishful thinking. Expectations of quality aside, Chinese Democracy just doesn’t represent enough – it should have been an Event, but instead it’s just another album; a solid listen with intriguing songs whose longevity will mostly appeal to the pre-converted. And its mastermind, let’s face it, has proven his long-time doubters right: not only did he reveal that he never had a brilliant scheme brewing after all, but it seems he is no visionary – or at least not as visionary as we might have once been inclined to believe.

One problem I have was that he speculated over the reasoning for canceling the 02 tour, then restated his speculation as fact.

However, I think his analysis was very balanced and insightful.

I've finally read the whole article. And although it is based in some facts, it obviously lacks perspective from axl's side or point of view.

For that, I'll only raise 3 questions:

1) isn't the artist allowed to self determine the time, context or situation in which he can produce art?

2) isn't the artist allowed to be out of the game (of work) due to psychological conditions?

3) if you would lose people who are very close to you, while living in reclusiveness, do you think you'd be willing do work as deep and strong as axl demands of himself? wtf, do u think axl is izzy who lays some harmonies and put some words into it and BAHM! here's an album?

Of course Axl as a lot of "guilt" in this matter. But remember: he is - no matter who's fault it is - alone in the project. The other guys are hired hands and that's it. The longer it took, the harder it became the battle with himself. We all know he's not well at coping with compromise. And it took a lot of that in negotiating with managers, labels and the biz.

So the answer to the question is? Yeah, Axl knows where he is. He is in the jungle and, just like almost 30 years ago, he knows he has a lot of fighting to do in order to survive. The trouble is he's not ungry anymore...