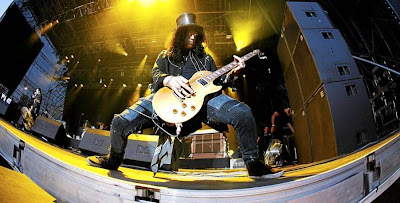 There isn't much to gripe about, but we ended up with a glorified karaoke in the amphitheatre for a somewhat goofy start to the festival.

When the Guns N' Roses guitarist slipped onto the scene we got a lot of hits - and half hits - from the last decade, performed with a kind of respect, but with little extra.

Ron Wood received points for attendance, but didn't perform as if he was completely present. When he and Slash were struggling to find the key of the backing vocals on old songs like "It's Only Rock 'n' Roll" you knew that this was going be a long and strange evening.

Slash surrounded himself with a group of halfway-decent performers, one of whom was John 5. The man has a long resume - David Lee Roth to Marilyn Manson - and he rubs his guitar neck with so much joy that it almost glows. But it ended like a version of Guitar Hero in "Advanced" mode.

Fergie from the Black Eyed Peas was a breath of fresh air in between all the guitar solos, and she showed that she can stack-up to Robert Plant ("Black Dog") and Axl Rose ("Sweet Child O' Mine"), but she should really drop all the pole-dancing - it was in excess even for an audience that included a fair amount of people who were young when Bob Dylan's "Knockin' on Heaven's Door" came out.

"Knockin' on Heaven's Door" was the only song dedicated to Michael Jackson, the rest of the concert was an obvious homage to so-called "Dad-Rock" - read: '70s and '80s guitar-driven hits.

And in such a setting Slash has proven himself again and again.

Almost at the very end we got the world's spookiest grandpa, Ozzy Osbourne, for a round of old Black Sabbath tunes. He was calm in the grandeur, as he sprayed the audience with water time and time again.

It was kind of sweet to see Ozzy radiating joy and jumping around (to the extent he can) on stage.

But unfortunately, even with a living legend this was quite dead.

PS: McQueen, who played second-to-last, came on with a guitarist who had only been with them for three days. It felt like a scene from last year's Quart. 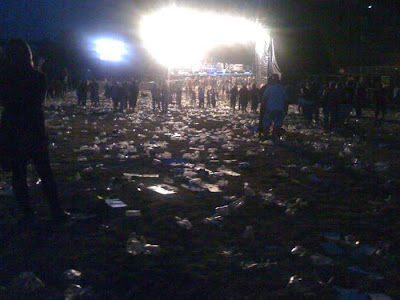