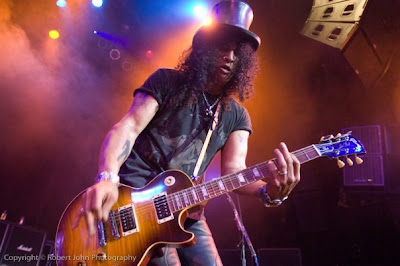 Hey all, what's happening? Everything's good on this end. It has been a pretty productive summer so far. My record should be done next month & the recording has gone smoothly & sounds fucking great.

Steven Adler played on the 1st of the last 3 tracks yesterday, along with Flea on bass. The song kicks ass & the drums & bass sound so recognizable & sound so fucking good. Steven is staying clean, which is great, flea is just amazing, period. Steven, Flea & I all lived & met in the same neighborhood in West Hollywood back in the day. Yesterday, we had a great time reminiscing about when we all 1st started playing Rock & Roll & how school didn't fit into the plan, we were like 15. Flea was the 1st one to join an "established" band called "Anthem," I remember being envious. I had a band called "Tidus Sloan" but we didn't have a singer. Sound familiar? Steven & I didn't really have a band together until a few years later when we joined Nikki Sixx's old band "London" after Izzy left. Which, incidentally, was very short lived.

Izzy came down & played on a track a couple weeks ago, that sounds great too. It was good to see him, it's been awhile. Our guitars together really do have a sound all their own.

Besides having some friends of Eric Valentine's come down from Northern California & play cello & violin on a track, I haven't had any other guest musicians so far. Having Flea, Steven & Izzy play has been a real gas. There might be a couple more surprise musicians on this record I think.

The movie I scored while I was writing songs for my record last summer, "This is not a movie," is in it's final production stage & being shopped for distribution. I went to a closed screening of it at Warner Bros a couple weeks ago, its a really dark but funny movie, very indie & very raw. It really surprised me to hear/see it all put together. The score is awesome & almost entirely comprised of electric guitar. It gives the picture a distinct musical personality, which has many moods. Edward Furlong & Peter Coyote star in it, by the way & are phenomenal. Its funny, Edward Furlong was teenage delinquent "John Conner" being chased by the Terminator in "Terminator 2." His key scene was when he was escaping on his motorcycle to the tune of GnR's "You could be mine." Now he is staring in a movie that I did all the music for 18 years later.

The Norway gig happened & was a fucking blast. The band (Jason Bonham, John 5, Ted Andreadis & Franky Perez) was amazing & Ozzy, Fergie & Ronnie Wood were stellar to say the least. But, what really made the gig great was the crowd, they were pretty fucking fantastic. There is some talk of doing some more shows like that in the not too distant future, its too good of a time.

There's a lot of stuff coming up actually, all good. As it happens I will keep you up to date in as timely a fashion as I am capable.