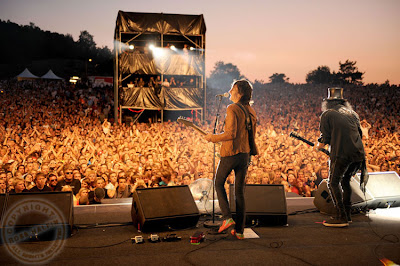 By Scott Rowley for Classic Rock.

Backed by an all-star band including Jason Bonham, Chris Cheney (formerly of Jane’s Addiction), guitarist extraordinaire John 5 (Marilyn Manson, Rob Zombie), and star-in-the-waiting Frankie Perez on vocals, Slash & Friends played a 19-song set of rock classics that, in a strong summer of classic rock events, stands as one of the highlights of the summer.

It started with Slash, Bonham, 5, Cheney and Perez ripping the arse out of "Immigrant Song." Perez, a Las Vegas rocker who’s done his own solo album and worked with System Of A Down side-project Scars On Broadway, is the perfect fit – amiable but bad-assed and blessed with a voice that can handle a Led Zeppelin classic as easily as AC/DC’s "Highway To Hell" or Nazareth’s "Hair Of The Dog." His take on "Slither and "Fall To Pieces," meanwhile, surely marks him out as the frontrunner for the vacant Velvet Revolver spot. (Backstage Perez and Slash revealed to Classic Rock that Frankie had been working with VR post-Weiland, before Slash’s solo album and Duff’s Loaded commitments put it all on hold.)

For "Nightrain," McQueen’s Leah Duors takes over on vocals. Slash has long championed the all-girl band and Duors shows why, with a vicious Axl-with-PMT vocal, and a stage presence that belies her current little-league status.

After Leah, it’s time for the big guns. Rumours were that Ronnie Wood had fallen off the wagon again. It’s possible, but you can’t tell. The tracks Woodsy joins them for – "Honky Tonk Women," "Stay With Me," "Knocking On Heaven’s Door" (cheekily – or sincerely? – dedicated by Slash to Michael Jackson) and "It’s Only Rock’n’Roll" – were custom-built for sloppy, boozed-up playing. Teddy Andreadis plays piano and sings in a great Dr John meets Joe Cocker voice. It’s a riot. 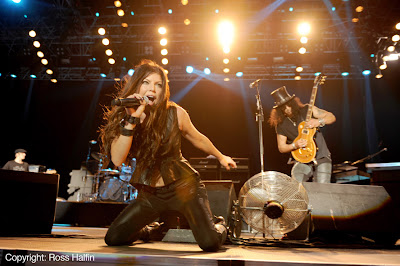 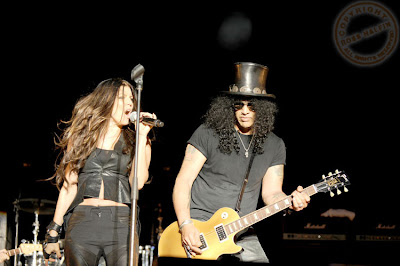 The last time I saw Ozzy Osbourne perform was with Black Sabbath at Download 2005. Sabbath were sluggish, dreary and at the end of their tether. Tonight, by contrast, Ozzy is a ball of energy. “Lemme see your hands!” he shouts, and the whole field sways. The guy next to me starts walking around, randomly humping the legs of strangers. “Let’s go fucking crazy!” You’ve heard it a million times, but seeing it work like it does today is a sight to behold. John 5 brings Randy Rhoads back to life as they plough through "Crazy Train," "War Pigs," "I Don’t Know" and "Paranoid." The sound is so big I swear it created a new fjord behind us.

Then he’s off and Frankie and Fergie are back on for "Whole Lotta Love" and "Paradise City." The show ends, Fergie writhing on the floor, Frankie leading the charge, Slash soloing into the night. “This is one of the best gigs I’ve had in a very long time,” says the man himself.