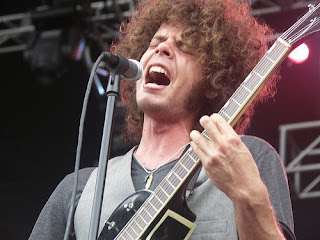 It was also recently revealed that Slash did some songwriting with guitarist Andrew Stockdale of Wolfmother for a song that was recorded after a recent Wolfmother recording session in Los Angeles.

"Well he just reached out. His manager sent an email through and asked if I'd be interested and I was honored. Honored to play with Slash. So when we got to LA to make the Wolfmother record, after the session of doing Wolfmother songs Slash dropped in one night and we just sat there with an acoustic and went through the song."

Andrew also talked about Slash keeping him on his toes with his creative process and what an incredible experience it was for him.

"It was really, really like an incredible experience to write with Slash. He's a cool guy. He moves really fast too. His creative process had me on my toes. He's very alert with what he's looking for and how a song needs to move."

Ex-Queens of the Stone Age bassist Nick Oliveri has also recorded a guest appearance for the LP.

At the end of July, Slash announced on his twitter page that he is "winding down" and has 2 more songs to complete for the album that he hopes to release by the end of 2009. As of press time Slash hasn't confirmed if he will be touring in support of his solo album as his band Velvet Revolver continue their search for a lead vocalist.