Tribute Bands the Beneficiaries of a Bad Economy 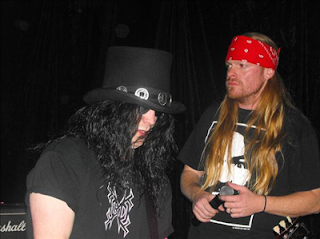 Imitation as a Form of Flattery
No Longer a Parody, Tribute Bands Pay Homage to the Original
By Mario Iván Oña

Who knew that tribute bands could be the beneficiaries of a bad economy?

Given the chance to pay $50 to see the original Journey or $12 to see the Frontiers, a band that covers Journey songs, fans may well be opting for the low-cost alternative. And that alternative may also be high in entertainment value.

We're not talking about Elvis impersonators here or other similar parodies. We are talking about talented musicians who may, in fact, put on a better show than their aging counterparts.

"The Rolling Stones are obviously in the twilight of their career or farther," says Chris LeGrand, 47, who is Mick Jagger in the Rolling Stones tribute band, Satisfaction, which is performing in the area next week. "Our shows give fans a slightly younger version of what they're used to seeing, and we're looking to do some shows with a '60s look, a '70s look and a modern-day look."

Musically, Satisfaction is dead-on. But for the full effect, it might not hurt to squint to convince yourself that LeGrand's pouting lips really belong to Jagger.

Joe Pascarell, 48, lead vocalist of the Machine, a 21-year-old Pink Floyd tribute band, says: "I think we've probably done as many shows as the real Pink Floyd at this point. We've performed about 2,000 gigs."

And it shows. During a recent acoustic set (a departure from the band's typical high-octane, laser light show), the musicianship permeated with hypnotic effect. During "Shine On You Crazy Diamond," the classic Pink Floyd tune dedicated to founding member Syd Barrett, Pascarell sang with such genuine sentiment and visible emotion, you would have sworn Barrett was Pascarell's pal.

Chad "NotQuiteAxl" Atkins, 33, lead singer of Appetite for Destruction: The Ultimate Tribute to Guns N' Roses, thinks a hardcore fan should catch both bands. "We would quench your thirst for that old Guns N' Roses with Slash and Axl Rose wearing a bandana instead of sporting cornrows or braids," he says.

The band has learned Rose might not be touring in support of GN'R's long-awaited album, 2008's Chinese Democracy, and though Atkins says he likes the album and his group has learned it, "we're kind of sitting on it until we see how people respond to it."

So far, so bad. Though it has gone platinum, the album received tepid reviews and hasn't been selling as well as expected. If Rose does go on tour, fans will have to decide between forking out bigger bills to watch an older Rose perform some unrecognizable songs or watch younger, more nimble look-alikes perform vintage GN'R.

Current GN'R keyboardist Dizzy Reed has played with Appetite for Destruction, and saxophonist Norbert Stachel, who has toured with Pink Floyd founding member Roger Waters, has played with the Machine. Although Waters's son, Harry, can't recall watching the Machine, he says from his London flat: "I think tribute bands can be great, particularly for bands that don't play anymore, like Pink Floyd. I can only see this as a way of honoring the band."

Steven Kurutz, author of "Like a Rolling Stone: The Strange Life of a Tribute Band" agrees: "My sense is that most famous musicians are flattered by tribute bands, and in a way, they keep the flame alive and help promote the music. I'm certain the extensive touring of Badfish, a Sublime tribute, has helped push sales of Sublime's recordings."
posted 12:41 PM

AFD is a helluva show. Seeing chidem material from them would rule.

I recently came accross your blog and have been reading along. I thought I would leave my first comment. I dont know what to say except that I have enjoyed reading. Nice blog. I will keep visiting this blog very often.